Previously on the Amazing Race. The 10 remaining teams raced from Isle Delfiono to Poke Park. Emil & Marta lost their lead by not understanding their clue. When Silver & Blaze rose to the top, they earned themselves first place. Yoshi & Birdo had a misunderstanding and whent to Pallet Town. When they relised, they ended in last place and were eliminated.

Phil: "Yoshi & Birdo, you have been eliminated from the race."

Only 9 teams remain. What will hgappen next

This is Poke Park. A paradise island where pokemon of all sises come to play. I am standing here at the Sky Pavillion. This is were the Sky Prism is kept safe. This was also the second pitstop, in a race around the world. The 9 remaining teams stayed here for a manditory 12 hour rest period. From here, they must try to get to the next pitstop by following clues in concealed envalopes. Silver & Blaze, who were the first to arive at 7:00 am.

Silver: "Make your way down to the Meadow Zone."

Teams must now take their baloon down to the Meadow Zone and find thid Bidoof. Once you find him, you must give him some lumber in exchange for your clue.

Blaze: "Let's hurry, Team Sexbat is right behind us."

Rouge: "Hey knuckles, I think I found something? No wait, it's just a Magikarp."

The Magikarp then slaps Rouge multiple times in the face with it's tail. It then jumps into the water and spits water out at Rouge.

Emil: "All right, let's get down to the Meadow Zone."

Silver & Blaze hand in their clue whil Rouge is still being beaten up by th Magikarp.

Knuckles: "Come on Rouge, you can beat that stupid fish."

Bidoof: (To Silver & Blaze) "Thanks for the wood, here's your clue."

Blaze: "Make your way back to the Beach Zone and get aboard Daisy's Cruiser."

Teams must make their way back to the Beach Zone and board Daisy's Cruiser witch is parked at the far end of the beach. Then find the Koopa instructer who will give them their next clue.

Silver & Blaze leave to the Beach Zone while Emil & Marta arive. Marta looks over and see's Rouge being beat up and Knuckles trying to help.

Marta: "What's wrong with them."

Blaze: "Allright, do you remember were the Beach Zone is?"

Silver: "I thaught you knew where you were going!?!?!"

Knuckles: "I still can't beleive you got beaten up by a Magikarp."

Rouge: "Oh shut up and find the stupid Koopa."

Koopa: "Hi, you guys must be from the race. Here's your clue."

This is the first of 2 Fast Forwards found in the race. If the team is able to complete the Fast Forward, they can skip all tasks and go directly to the next pitstop. For this Fast Forward, teams must dive into the ocean and find Milotic who is hidden in a cave underneath the boat.

Knuckles: "We're way ahead, we don't need the fast forward."

Rouge: "All right, so it's a Road Block: Who has more strength."

A Roadblock is a task only one team member can perform and each team member can only perform 6. In this Roadblock, the chosen member must run to the party deck and carry three pounds of supplies up to the Party Director.

Knuckles: "All right, I'll be right back."

Knuckles: "Are you sure, your not very strong."

Emil: "You wann take this."

Marta: "I'm not really that strong."

Rouge is having trouble even trying to pick up her bag while Emil & Yuna start right away.

It then cuts to a road were Prince & Elika are waiting on a bench. Mario & Luigi and Bowser & Bowser Jr. run by them.

Prince: "Are you sure we should be waiting here. We just dropped to 7th."

Elika: "I told you, we made an alliance and we have to stick with them. With the Yoshis gone, Jessie & James are our only allies left."

Jessie & James completly ignore them and run past.

Elika: "And there they go."

Prince & Elika start to run to catch up.

Bowser: "Finaly, one I could do good at."

Yuna: "Finished, get the clue."

Yuna: "Make your way to the dining hall."

Teams must now make their way to the dining hall. Once they get their, they must get a tabel and look at the menu for their clue.

Jessie & James run to the beach were a bunch of scuba gear is set up.

Prince: "Well, so much for relying on Team Rocket."

Elika: "Hey look, their doing the Fast Forward. Should we do it."

Sabel: "Come on, our only chance is if we take the Fast Forward."

Elika: "Wow, that was easiar then expected."

Prince: "All right, let's go to the Dining hall."

Both the teams run to the Dining Hall.

Tidus: "Well, this must be the dining hall. Hey, were's the menu."

Yuna: "Ah, heres one. Looks like the clue is written on it. It's a Detour. Serve or Stuff."

A detour is a choice between two tasks with their own pros and cons. In Serve, teams must serve 15 trays of food to awaiting guests. This task isn't that physicly demanding, but could take some time. In Stuff, teams have to stuff ingrediants into a giant turkey. This has potential to be short, but it may be tricky to fit all the ingrediants in the turkey.

Tidus: "I say serve, it's probably the easiar task."

Jessie: "James, have you found the stupid Milotic yet."

James: "No, but the hedgehog sisters are doing this aswell."
Mabel & Sabel: Currently atempting Fast Forward

Mabel: "Come on, were's that Milotic."

Jessie: "Make your way to the next pitstop. The captain's room in the Daisy Cruiser."


Haveing completed the Fast Forward, Jessie & James can now skip all tasks and go strait to the pitstop. The captain's room in Daisy Cruiser. The last team to check in here, may be eliminated.

Rouge(struggling): "You think I don't relise that!"

Knuckles: "We're are they going."

At the captain's room.

Phil: "As a special prise, you each won two free tickets for a 7 day trip on the Daisy Cruiser."

Tidus: "Make your way to the next pitstop."
Teams must make their way to the captain's room. This is the pitstop for this leg of the race. The last team to arrive, may be eliminated."

Tidus: "Warnig: Last team to arrive may be eliminated."

Mabel: "Oh man, I can't beleive we didn't get the Fast Forward."

Sabel: "Who cares, just bring the supplies to the guy."
Mabel surges past Rouge leaving her in the dust.

Rouge makes it to the end and receivs her clue.

Yuna: "Some one must have taken the fast forward."

Prince: "Hey, I wonder what happened to Jessie & James."

Elika: "I don't know, I haven't seen them since we passed them in the woods."

Emil: "I think I saw them run upstairs."

Elika: "Now why would they beat up there."

As they go to stuff, Prince & Elika and Emil & Marta get the clue and run to the pitstop.

Luigi: "All right a Mario. Let's a do the serving."

Silver & Blaze run up to the mat since they finished their detour.

Knuckles: "We have to hurry a beat the hedgehog sisters."

Knuckles & Rouge run into the kitchen to stuff and pass the Bowsers who finished their clue.

Bowser Jr.: "Make your way tot he captain's room. The last team to arrive may be eliminated."

Mario: "Thats a 15. Looks like a it's a footrace with the a Bowsers again."

Mario: "Oh man. The a Bowsers are allready here."


Back at the Detour.

Mabel & Sabel run out to get to the pitstop.

Rouge: "Oh no, the hedghog sisters are finished."

It now shows clips of Knuckles & Rouge and Mabel & Sabel racing to the pitstop.

Mabel: "Oh my gosh, how did we ever beat team sexbat?"

Phil: "I'm sorry to say, but you've both been eliminated from the race."

Knuckles: "See, I told you I should have done the Roadblock. We whent from 1st to last because of it."

Rouge: "Well sorry mister, at least I was trying to be resortful!" 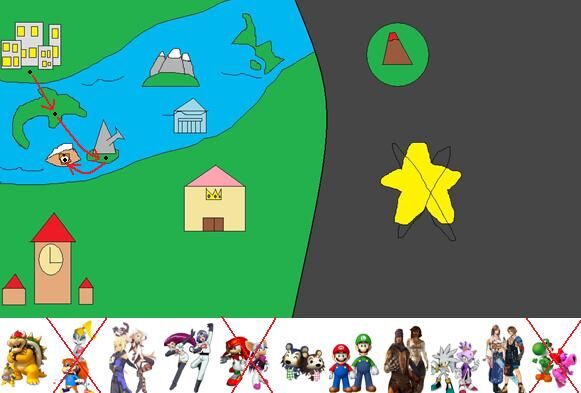 Retrieved from "https://fanfiction.fandom.com/wiki/%22Cruiser_Ahoy!%22?oldid=52833"
Community content is available under CC-BY-SA unless otherwise noted.