Previously on the Amazing Race. 11 teams of 2 started a race around the world from Brawl Stadium to Isle Delfino. Emil & Marta took a strong lead with Blaze & Silver Close behind. But for Conker & Berri, they had problems before they even reached the airport.

In the end Conker & Berri couldn't keep up the pace and they were eliminated. 10 teams remain, what will happen tonight?

This is the entrence to the Pinna Park Rollercoaster. Located in Isle Delfino, and was the 1st pitstop in a race around the world. Emil & Marta who where the 1st team to arrive at 7:14 pm.

Emil: "Race to the docks and book a boat to your next location."

The teams must now race to the docks and rent a boat. Their destination, Poke Park. The only clue that tells the teams that is a plastic Pikachu with the PokePark logo on it's back.

Emil: "I don't know, the only other thing here is a plastic Pikachu."

Blaze: "Race to the docks."

Knuckles: "This Pikachu is supposed to be a clue. It's got something on it's back."

Silver: "It must meen we go to Poke Park."

Silver & Blaze and Knuckles & Rouge get on a boat to Poke Park. Emil & Marta were still trying to figure out the clue.

Emil & Marta relise this and run to the dock to get a boat to Poke Park.

Tidus: "A plastic Pikachu? What's that supposed to meen?"

At Poke Park, the 1st boat arrives and Silver & Blaze and Knuckles & Rouge run off to the clue.

Silver: "Make your way to the Beach Zone."

Teams must now race to the Beach Zone. A tropical beach that is a great resort area. Here, they must find Ferraligator who will give them their next clue.

Silver: "Mabey we should get a map, that way we don't get lost."

The two go to the store to grab a map.

Mario: "Let's a go. The Bowsers are right behind us."

Bowser Jr.: "Let's get going dad. There are only 4 teams behind us."

Bowser: "WE SHALL BEAT THOSE MARIOS!!!"

James: "Let's go Jessie. We need to get ahead."

Knuckles: "I present to you, the Beach Zone!"

Rouge: "Ugh, that's the 3rd dead end we've gotten to. Mabey we should go get a map."

Silver: "Blaze over here I found it."

Feraligator: "You must be with the race. Here's your clue."

A Detour is a choice between 2 tasks. Each with their own pros and cons. The choice, surf or soar. In surf, teams must take a Gyrados and ride out to their clue on the Iceberg Zone. Gyrados are fast, but are hard to control. In soar, they must gut on a Pelliper and fly to the Iceberg Zone. Pellipers are easy to control, but are relitivly the slower choice.

Rouge: "Whatever you do, don't go out there without a map."

Elika: "Come on sweaty, it looks like we're going to Poke Park."

Prince: "All right, see ya there guys."

Prince & Elika run and get on a boat.

Yoshi: "Well, this is a plastic Pikachu. What dose that mean."

Yoshi & Birdo get on a boat to Pallet Town.

at this point, everyone who departed is at the gift shop buying maps. Except for Silver & Blaze who wer having some trouble with their Gyrados, and Yoshi & Birdo who were heading to Pallet Town.

Blaze: "Come on you stupid Gyrados!"

Silver: "Calm down, your upseting him."

The Gyrados got angered and flung them off of him.

Silver: "What did I tell you."

Blaze: "Well, at least we landed at the ice burg. Let's go."

Blaze: "Take Lapras back to the Granite zone."

Teams must now take Lapras to the Granite Zone. Once their, Absol will give them their next clue.

The three teams run out as Mabel & Sabel come to get a map. At the beach.

Knuckles: "Let's do the Gyrados. It should be easy."

Yuna: "I dout we can handle that monster. Let's do the soar."

Elika: "I was thinking we should form an alliance. We allready have one with the Yoshis, you guys can join."

James: "Sure, that will make sure we stay."

Prince: "Speaking of Yoshis, I wonder were they are."

Birdo: "We're here. I wonder where the clue is."

Blaze: "Roadblock. Who has strong arms."

A roadblock is a task witch only one member may complete. For this task, the chosen team member must climb up to the top of the pyramid and find Jirachi. She will give the team mate her clue.

Silver: "You did the last one, I'll take this."

Mario: Let's a go brother. We need to get a to the beach."

Knuckles: "All right, let's get to the Granite Zone."

Blaze: "Come on Silver, you can do this."

Silver reaches the top and looks out into the sea.

Silver: "Blaze, I see a Lapras coming. It must be another team!"

Jirachi: "Hi, you must be from the Amazing Race. Here's your clue."

Marta: "Hey Emil, it looks like we beat the Final Fantasy team. I can see their Pelliper still flying."

Elika: "I think we should both go to the Gyrados."

Jessie: "Yeah, it will be much faster."

Bowser Jr.: "Come on papa. The hedgehog sisters are the only team behind us."

Bowser: "We shall ride the Gyrados."

Knuckles: "Who has strong arms. I'll do this one."

Knuckles runs up as Silver runs down with the clue.

Teams must now jump into a hot air baloon and fly to the Sky Pavillian. This is the pitstop for this leg of the race. The last team to arrive, may be eliminated.

They run off and Knuckles runs down with the clue.

Marta: "Who has the stronger arms. Mabey you should do this one."

At the Sky Pavillion. A hot air baloon lands."

Phil: "Silver and Blaze, you are team number 1."

Phil: "As a prise, you both win a free week in the Beach Zone resort and hotel.

Phil: "Knuckles and Rouge, you are team number 2."

Tidus: "Come on Yuna, I got the clue. Let's go to the Granite Zone."

Elika: "Wow, that was harder then I thaught."

James: "Can we stop arguing and get the clue."

Marta: "Yeah, that was a little tough with the Gyrados part."

Luigi: "Finally, let's a get to the Granite Zone."

James: "You should do this one Jessie."

Jessie: "And ruin my manacure, pass. You do it!"

Bowser: "Oh just get on the Lapras!"

At the roadblock here are the standings.

Elika: "Perfect. We did great."

James falls down the pyramid head first with the clue in his hand.

Bowser Jr. and Mabel run down to join with their partners.

Mario: "So that a means Mabel & Sabel aren't in last."

Sabel: "WE'RE STILL IN THE COMPETITION."

It then shows Yoshi & Birdo in Pallet Town.

Birdo: "Did you find anything yet?"

Birdo: "We've been surching for hours now. Let me see the Pikachu."

Yoshi tosses the plastic Pikachu to Birdo but she drobs it and it lands so it's back is facing up.

Birdo: "There's something written on the back of it. It says, Poke Park."

Yoshi & Birdo then look at eachother a relise something.

Yoshi and Birdo run to the boat to go to Poke Park. When their boat lands, theres a sign telling them to go to the Sky Pavillion.

Phil: "Yoshi and Birdo...you are the last team to arive. I'm sorry to say but you've both been eliminated from the race."

Yoshi: "Aw man. That one stupid mistake got us eliminated." 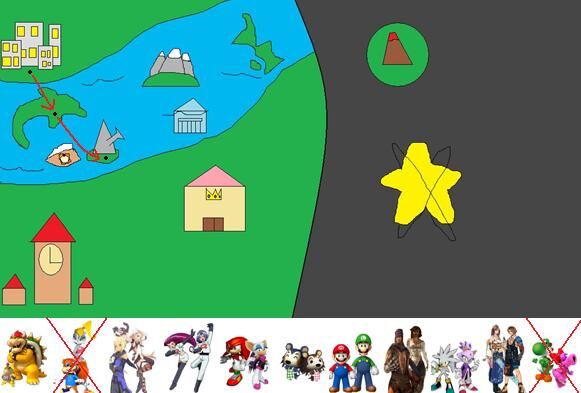 Retrieved from "https://fanfiction.fandom.com/wiki/%22PokePanic%22?oldid=52799"
Community content is available under CC-BY-SA unless otherwise noted.