Phil: "I am standing on the the great brawl arena, located in Mushroom City. Here, 11 teams of 2 bonded by love, family, or friendship are ready to start a race around the world. At the end of this race, 1 team will cross the finish line and win themself 1,000 coins. The 11 teams are..."

Bowser and Bowser Jr., Father and son from the mushroom kingdom.

Emil and Marta, Dating from Palmacosta.

Mario and Luigi, Brother and haroes of the Mushroom Kingdom.

Prince and Elika, Married from Persia.

Tidus and Yuna, Dating and living in Zanarkand.

and Yoshi and Birdo, Married from Yoshi's Island.

(All the teams are lined up at the start, and Phil walks up holding a red and yellow paper.)

Phil: "Welcom teams, you guys are about to embark in a race around the world. This race us duvuded into 13 legs, at the end of each leg is a pitstop. You want to get to that pitstop as fast as you can, because 8 of these pitstops are elimination points. If you arrive last at one of these points, you will be eliminated. What I'm holding in my hand is a clue, this will help you find each pitstop. Your 1st clue is with your luggage. On my mark, you can run to your luggage, read your clue, and take one of the awaiting cars in the driveway. What you do from there on is up to you. Good Luck........Travel Safe.........GO!!!!!"

(The Teams race off to their luggage to read there clue.)

Silver and Blaze: Currently in 1st

Silver: "Got any idea were we're going."

Emil and Marta: Currently in 2nd

Marta: "All right, I'm driving." (Looks down and sees a bunch of randome switches and buttons.)

Emil: "What are you waiting for, start driving!"

Marta: "Um, is this the start." (Presses a button and the airbag pops up in her face.)

Marta(muffled): "Yeah, mabey you should drive."

Tidus and Yuna: Currently in 3rd

Tidus is speading down the road.

Yuna(paniced): "Are you sure this is safe?"

Tidus: "You wanna win, don't ya. Woah!" (Tidus stops the car at a screach to be stopped by a traffic jam.)

Silver and Blaze, Emil and Marta, and Jessie and James make it to the airport and run in.

Silver: "Cool, looks like we're going to be on the same plane."

Knuckles and Rouge: Currently in 4th

Rouge: "Hey, is that Tidus and Yuna over there?"

Tidus and Yuna finally made it to the airport, with Bowser and Bowser Jr. close behind when a car crahsed throught the wall.

Kunuckles and Rouge step out of the car.

A Few Hours Later, everyone has checked into a plane except for Conker and Berri, Yoshi and Birdo, and Mabel and Sabel.

Conker and Berri: Currently in 9th

Berri: "Conker, do you even know where we're going."

Berri: "Who the heck is Susan."

Conker: "Are you saying you don't trust me?"

Conker: "You never trust me! Why do we even date?"

It was too late though, the car crashed into a tree and sent parts flying. Conker and Berri were lying on the ground and S.U.S.A.N. falls and hits Berri on the head.

Yoshi and Birdo and Mabel and Sabel finaly arrive at the airport.

At Isle Delfino, flight one lands and Emil & Marta and Silver & Blaze Race to he next clue. Jessi & James are having trouble finding their luggage.

Emil: "Roadblock, who has a good kick."

A roadblock is a task that only one member of the team can perform, and each team member can only do 6 roadblocks. For this roadblock, the team member must transport a durrian from the fruit venders to the shine store. The trick is, they may only kick it.

Flight two lands, and Knuckles & Rouge are the first off followed by Tidus & Yuna and Jessie & James.

Kunuckles: "I am so doing this." (Knuckles kicks the durrian, but it goes flying ang bounces off the wall.)

James: "Sound like kicking, you should do it Jes..."

(Before James could finish, the durian hits Jessie in the face and knocks her out.)

Marta and Blaze are moving fast when they see Knuckles coming behind them.

Marta: "Dang it!" (She quickly kicks the ball landing in the store.) "YES!"

Marta runs back to Emil with the clue as Blaze and Knuckles hit the ball and got their clues.

A detour is a choice with their own pros and cons. In long walk, teams must walk all the way to Pinna Park. It may take some time, but they will be able to leave right away. In long wait, Teams will ride a water taxi to Pinna Park. It's a shorter trip, but they must wait 3 hours between each taxi.

Marta: "Well, both the animal teams are right behind me. So mabey we should walk."

Emil and Marta start walking down the marked path.

The last plane lands and all the teams start running for the clue.

Rouge and Knuckles go to wait for the boat while Silver and Blaze descide to walk.

Tidus kicks the ball into the store and runs back to Yuna.

Yuna: "Well, one team is allready waiting so mabey we should walk."

Tidus: "Sure, we've been walking most the time since we've met."

The boat arrives and Knuckles & Rouge board.

At Pinna Park, Emil & Marta and Silver & Blaze arrived and grabbed the clue.

Silver: "Pitstop! Race to the top of the roller coaster to the entrence."

This is the entrence to the roller coaster in Pinna Park. This is the pitstop for this leg of the race. The last team to arrive, will be eliminated.

Knuckles and Rouge's boat arrive and they read the clue.

Rouge: "The last team there will be eliminated. Let's go!!!"

At the entrence to the roller coaster. The first team runs up to the mat.

Phil: "I have a special prise, as winner of this leg you each received a vacation to Isle Delphino with free passes to Pinna Park."

Silver and Blaze run up.

Phil: "Silver and Blaze, you are team number 2."

The teams go to the sleeping area, and Knuckles and Rouge run in.

Phil: "Knuckles and Rouge, you are team number 3."

Bowser: "Geez, what takes these boats so long?"

Bowser Jr.: "I told you we should've walked dad!"

Bowser: "Do you really think we'll be in the game if we had to run on feet?"

Back at the pitstop.

On the road to Pinna Park, Mario & Luigi were running ahead while Jessie & James were slowing down.

James: "Sorry, that kicking really did me in."

Bowser and Bowser Jr.'s boat was on there way to Pinna Park.

Prince kicks the durrian into the store and grabs the clue.

Elika: "I think we should walk, we're fast enough to beat those guys in a footrace."

Yoshi and Berri kick their durrians into the store and run to get their clue.

Birdo: "Come on, we're in third to last.

Mabel: "Come on, Conker & Berri are waiting so let's walk.

Luigi: "Come on a brother, let's a beat the Bowsers."

Bowser: "Gahh, how did the Marios beat us?"

Phil: "Mario and Luigi, you are team number 5."

Bowser struggles up the stairs panting.

It then shows Jessie running up the stairs with James on her back.

Phil: "Jessie and James, you are team number 7."

Jessie: "Man that dude is heavier then he looks."

Berri: "Ugh, the Hedghogs left half an hour ago and we came out before them."

Prince & Elika and Yoshi & Birdo: Currently in 8th and 9th

Yoshi: "Hey, we're pretty behind. Mabey we should all make an alliance so we don't leave early."

The 2 teams run up the stairs to the mat.

Yoshi: "Phew, at leat we're still in the race."

It then shows footage of both teams racing to the pitstop.

The Amazing Race Elimination Music Plays as Conker and Berri run to the mat.

Phil: "You are the last team to arrive. I'm sorry to say, but you've both been eliminated from the race.

Berri: "Oh well, it was fun while it lasted."

Conker: "Well, atleast I can go back to the pub." 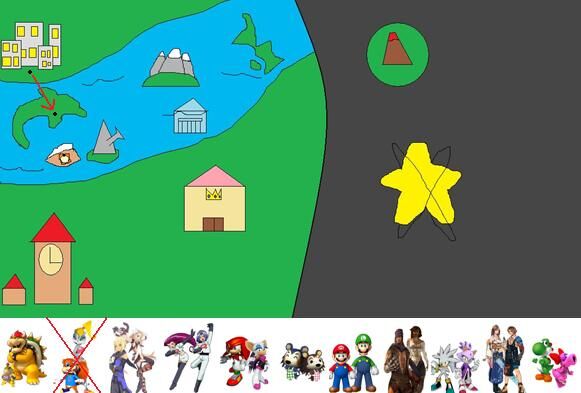 Retrieved from "https://fanfiction.fandom.com/wiki/%22The_Race_Begins%22?oldid=52812"
Community content is available under CC-BY-SA unless otherwise noted.