Anne Anderson is the main protagonist of Hachimitsu-Ink's spinoff web comic strip, "I Dream of Another Jeanie Bottle". Her already bizarre life takes an even stranger turn when she finds herself transformed into a magical genie.

Anne Anderson's genie bottle is what she was about to buy at the store, but accidentally opened it causing herself to be transformed into a magical genie and be trapped in the bottle. She and her bottle were finally sold after seventeen hours and forty-nine minutes and brought all the way to Demitri's apartment in Dubai. It is unknown who released Anne from the bottle when the bottle came to the apartment.

Anne Anderson was transformed into a magical genie while shopping for a genie bottle that cursed her. While she was controlling the cosmos, she was blinded by the light of the reflection of her eyes above her, and was sucked into the bottle. That was when a mess was made at the shop. Anne and her bottle she's trapped inside were finally sold from seventeen hours and forty-nine minutes, and was delivered all the way to Demitri's apartment in Dubai, which is 7,713 miles from the shop. As Anne was released from her bottle, her master wasn't around. Anne, however, did her speech out loud with her eyes closed, and without control over her actions, found herself in Dubai, and met another genie named, Crystal in the apartment. Anne asked Crystal why she is a genie, and Crystal explained why, by reading Anne's bottle. Anne was disloyal to her bottle, although she doesn't want to be a genie, but she and Crystal were being summoned and are brought over to Haji's palace for a presentation to him, because Demitri is missing.

In both states, Anne has brown hair, green eyes, and fair skin. In her mortal state, she wears a ponytail for her hair facing down, a white shirt showing the bottom part of her body, and arms. In her genie state, her tail is colored in pink. She wears a gold ring in the form of a horse shoe around her neck, with pinkish purple clothing covering the middle part of her breast, making her model bikini, a blue jewel in the front of her waist, two blue diamond earrings, and two gold ring bracelets with a pinkish purple cloth attached to each other. 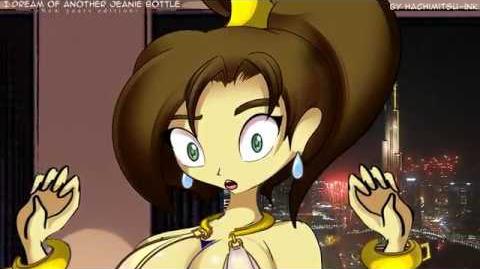 I Dream of Another Genie Bottle Page 8

Add a photo to this gallery
Retrieved from "https://fanfiction.fandom.com/wiki/Anne_Anderson_(Genie)?oldid=268734"
Community content is available under CC-BY-SA unless otherwise noted.