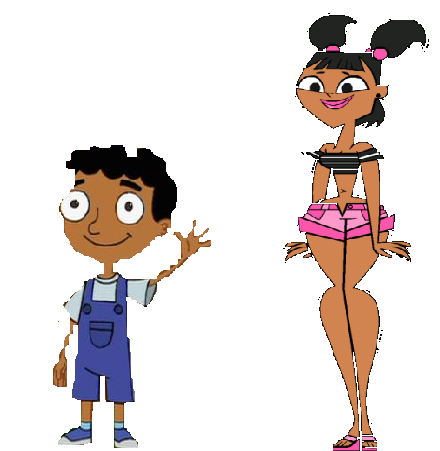 Katie kisses Baljeet on the lips, and he feels it all day.

Katie admits she likes Baljeet, only to be teased by her enemies.

We Will Be The Movies

Take Me and My Breath Away

Baljeet and Katie flirt with each other for the first time. At the end of the episode, after Katie wakes up, she asks Baljeet if they could be in a romance movie, and he says yes.

Baljeet is upset when he sees Katie's arm around Trent's neck, but Katie quickly apologizes.

Katie thinks about Baljeet throughout the episode.

Katie admits she thinks Baljeet is super-cute, which makes him happy. Later in the episode, Katie seems excited when she learns Baljeet gets to be in Total Cartoon Teams.

Katie goes on a date with Justin after losing a bet with Sadie, and Baljeet catches her in the act. Baljeet and Katie break up because of this misunderstanding, but with help from Justin and Sadie, they get back together at the end of the episode.

Dancing the Contest Away!

Baljeet seems upset when he and Katie were on opposite teams.

Katie hugs Bajeet when Phineas wins the Pokemon battle against Numbuh One.

Can't Be Fall'n Off!

Bajeet and Katie could be seen holding hands.

When Katie faints about Courtney leaving the competition, Baljeet catches her.

Retrieved from "https://fanfiction.fandom.com/wiki/Baljeet-Katie_Relationship?oldid=151304"
Community content is available under CC-BY-SA unless otherwise noted.