Eating meat, hanging out with friends, going on adventures

Chomper (a.k.a. Eager Chomper), originally voiced by Rob Paulsen, later Cannon Young and Max Burkholder, and now Isaac Brown, is one of the main characters in the Land Before Time franchise, starring in three films as well as the whole TV series.

He is a bluish-purple Tyrannosaurus, which is one of many species of carnivorous dinosaurs called "sharpteeth" in the Land Before Time series. He first appeared in The Land Before Time II: The Great Valley Adventure, when he was hatched by Littlefoot, Cera, Ducky, Petrie and Spike. Being raised by them for the first day of his life has led him to be friendly with herbivorous dinosaurs, although they do not always trust him. He is bilingual, being able to speak both the herbivore language of the plant-eating dinosaurs (heard as English to the viewer), and the "Sharptooth" language of the carnivorous dinosaurs, which seems to consist of grunts, roars, and growls, which makes him quite useful in solving disputes between the herbivores and carnivores. He is the only Sharptooth who is friendly to the gang.

Chomper was so well received by the fans and critics of the series that he was brought back as a supporting character in The Land Before Time V: The Mysterious Island and The Land Before Time XIV: Journey of the Brave and re-introduced as a main character in the television series. Ever since then, he has been listed in sixth place of the main characters in the franchise, after Littlefoot, Cera, Ducky, Petrie, and Spike, but before Ruby.

Theme song: You're One of us Now (The Land Before Time II: The Great Valley Adventure)

In Total Drama Before Time, his partner is Beth. He is also good friends with Gwen, Ben, Trent, Mac, Ruby, Spike, Cera, Ali, Littlefoot, Petrie, Tails, Cosmo, Courtney, Ash, Ducky, Cody, Izzy, Leshawna, and Noah. The people who despise him are Topsy, Paul, and Heather. Topsy did trick Chomper into quicksand to make sure he doesn't know about Team Galactic's plan of stealing the Lustrous Orb, even though he didn't want to do it, Paul thinks Chomper is pathetic, and Heather steals his stuff and kills his food. Tyler is also known to be scared of Chomper, because Chomper's bones are similar to that of a chicken's, but in later episodes Tyler seems to get along with Chomper. Ursula angered Chomper and Littlefoot by stating that they will have fight each other soon in a survival of the fittest. He is also good at electric guitar. He became Littlefoot's stepbrother in A New Enemy Approaches: Part 2. This is also the episode when he drags Brock once he falls in love (which is a running gag). While that happens, Ash and Dawn will act as if they were slowly tilting. Chomper gets irritated when Brock falls in love. Before he was accepted in the Great Valley in the Land Before Time TV series, he heard about Aaron, Alexis Rhodes, and Seto Kaiba. In A New Ally Is A Fast Biter?, his first duel was against Weevil Underwood. He uses a deck called "Dragon's Luck", which was given to him by Buttercup. He even knows how to speak French, German, and Japanese, which was seen in Right Off The Chain. In Night Circle Darkens, he revealed to be 9 years old. He is both a duelist and a Pokémon trainer. He is also known to be the first dinosaur to meet a member of the Elite Four, which was Lucian. This was during Izzy Or Isn't She. In that episode, he was taught how to catch Pokémon. His rivals are Hyp, Paul, and Barry. He is voiced by Max Burkholder.

Winged Dragon Guardian Of The Fortress #1

Winged Dragon Guardian Of The Fortress #2

Gift Of The Mystical Elf 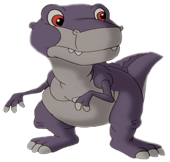 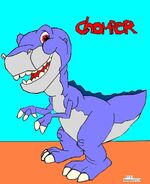 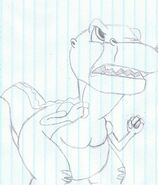 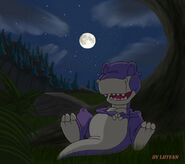