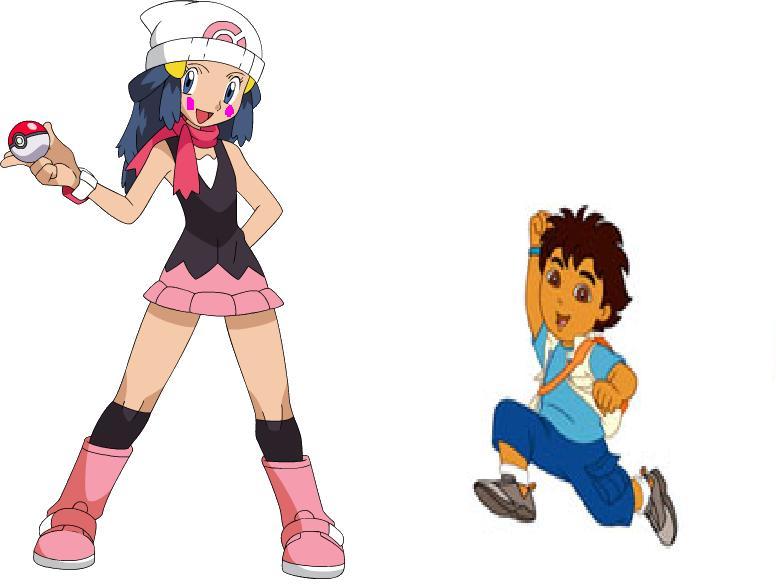 Fanfics, you can do better than this!

Dawn and Diego (along with Gwen (MB), Trent, Isabella and Duncan) are recycling for a recycling group.

Dawn blushes at Diego, making her feel like she's in love with him.

They can be seen sitting next to each other during Gwen and Vanessa's fight.

The Best Golf Game Ever

Dawn accidently hits Diego in the face with a golf club, but she quickly apoligizes. Diego forgives her, and kisses Dawn, making her blush. This also makes Ash a little jealous.

Dawn was supposed to go on a date with Diego, until he goes missing.

Dawn is very sad over his dissapearance, and Ash cheered her up by finding Diego.

We Will Be The Movies

Diego says that his relationship with Dawn is still going strong.

Diego and Dawn, along with Chowder and Panini, spend time at make-out point. Chowder starts flirting with Dawn, angering Diego.

After Teresa tells Dawn to say hard to get, Diego dumps her. Dawn has a breakdown, resulting her on the TDA Aftermath's final episode. Dawn apoligizes to Diego, and they get back together.

The Boy Who Cried Bigfoot

Dawn and Diego hug in fright when Penny tells her scary story and Izzy runs off.

Dawn smiles about Diego coming with her.

They watch the tournament, with Dawn's hand on Diego's.

What Hurted The Most

Diego and Dawn make-out after Dawn wins the contest.

Across The Second Ceremony

Dawn and Ursula had a love war to see who will Diego fall in love with. Even though Ursula wins, Diego chooses Dawn over her.

Dawn and Diego seem happy to see each other at the finish line.

Dawn catches Diego when he faints and takes him back home. Not so long after, she volunteers to take care of the injured animals at the Animal Rescue Center.

Dancing the Contest Away!

Diego feels relieved when he learns that Dawn is safe.

The reason Diego wins his team the challenge was to keep Dawn in the game,

Ursula and Dawn get in another fight for Diego's love.

Dawn, along with Ursula, is worried when Diego gets hurt by the bricks.

How Low Can You All Go?

Diego is instantly shocked when Dawn is gone. Dawn tells Diego to be strong and that she'll root for him. They share one last kiss before she goes.

Retrieved from "https://fanfiction.fandom.com/wiki/Diego-Dawn_Relationship?oldid=87125"
Community content is available under CC-BY-SA unless otherwise noted.