Dr. Robotnik is a fictional character and the tertiary antagonist of The Chronicles of Earthworld saga.

He is a sadistic and bloodthirsty virologist known for creating the Anarchic Virus as well as founding the Eggman Empire; his clone Dr. Eggman had been leading the organization whilst Robotnik had been kept in stasis. Prior to entering stasis, Dr. Robotnik instigated the Mobius apocalypse upon nearly destroying the planet; which indirectly caused the events of the series as it led to the impending conflict between the Resistance and Ambition. Upon creating the Anarchic Virus, Dr. Robotnik is responsible for creating the Virulents; which subsequently caused the eventual outbreak within "Earthworld" as well as reviving the Virulents' puppeteer, Nathaniel. 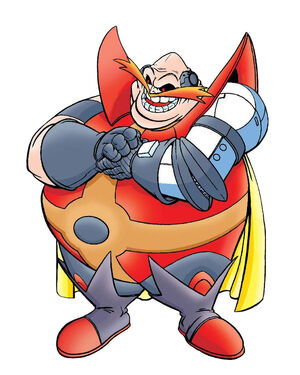 Retrieved from "https://fanfiction.fandom.com/wiki/Dr._Robotnik?oldid=213691"
Community content is available under CC-BY-SA unless otherwise noted.