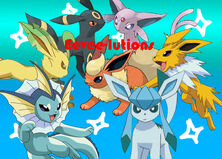 Eevee-lutions (イーブイの進化フォーム Ībui no shinka fōmu) is a TV show about the 7 evolved forms of Eevee: Vaporeon, Jolteon, Flareon, Espeon, Umbreon, Leafeon and Glaceon. They have just evolved from Eevee and are working together to become the strongest Pokemon ever!

Lumineon - Glaceon's crush and a Water-type. In The Pidgey and the Beedrill, he evolves from Finneon. In Fishy Daddy, it is revealed that he's been in love with Glaceon for a long time, ever since he first saw her as an Eevee; in that same episode, he and Glaceon officially become a couple.
Bellossom (キレイハナ Kireihana) - Jolteon's rival and a Grass/Poison-type. On the outside, she's a sweet, gentle Pokémon, but on the inside, she is battle-crazy and hates to lose.
Gengar - Leafeon's best friend and a Ghost-type. He was a wild Haunter until Trading Myself Away, when Lewis caught him. In the series finale, it is revealed that he has since evolved from Haunter into Gengar yet still stays with Lewis.
Beedrill (スピアー Spear) - An antagonist and a Bug/Poison-type. She has a crush on Finneon/Lumineon and antagonizes Glaceon for "stealing" him, but after she is beaten once and for all by Lumineon himself, she seems to give up on him.
Raichu - A young Pokemon who resides in a Day-Care and an Electric/Psychic-type. He evolved from Pichu to Pikachu prior to The Pidgey and the Beedrill and then again into Alolan Raichu in Two for Raichu. However, his prejudiced parents don't allow him to return to the Day-Care in Kanto after catching wind of this news, and by the series finale, he's staying at the Pokémon Nursery in Alola.
Sylveon (ニンフィア Nymphia) - A Fairy-type and the mother of all of the main characters. She was thought to have abandoned her children while they were all still just Eevees, but in the series finale, it was revealed that she had met a compassionate trainer - Sun's mother - and decided to become her Pokémon partner, similar to how Vaporeon decided to go with Sun.
Espurr (ニャスパー Nyasper) - A Psychic-type who befriends Umbreon and Espeon after leading them out of a forest.
Venusaur - A Grass/Poison-type who was a starter Pokémon in Professor Oak's lab. As a Bulbasaur, she had a hunger for adventure, but she never got picked until Moon came along. In the series finale, she was revealed to have since evolved all the way to Venusaur.
Vulpix - An Ice-type who came from the Alola region. She has a shy, withdrawn personality, but she tries to become more courageous. Flareon has a crush on her, and in Fire Plus Ice Equals Love, she reciprocates his feelings.
Vulpix K - A Fire-type and a friend of Flareon. She loves the Alola region but knows that she's not the Alolan variant of her kind; thus, she calls herself "Vulpix K" to diverge herself from Alolan Vulpix.
Togepi - A Fairy-type and Glaceon and Lumineon's "adopted son". He was born at the beginning of Fishy Daddy at the same Day-Care where Pikachu lives.
Shiro - A shiny Eevee, as well as the only shiny Pokemon to appear in the series. He ends up becoming one of Moon's Pokemon and evolving into Vaporeon in the process, and he ends up battling Vaporeon in the final episode.
Muk - A Poison-type and an old friend of Leafeon's. As a Grimer, he put Leafeon (who was still an Eevee at the time) through some training to learn Sludge Bomb.

Professor Oak - A Pokémon Professor who gives the starter Pokémon to new Trainers in the Kanto region. (Of course, this is the same Professor Oak from the original Pokémon games.)
Moon - A new Pokémon Trainer from the Kanto region who picks Bulbasaur as her starter. Afterward, however, she decides to journey through the Alola region instead due to their trials being different from other regions' Gyms. By the series finale, she is Alola's first Champion, but her title is soon taken away by Sun. She is loosely based off of the female character in Pokémon Sun and Moon.
Lewis - A Pokémon Trainer who is currently traveling through the Kanto region. He becomes Haunter's trainer in episode 6 and treats him, along with his other Pokémon, with a lot of compassion.
Sun - A Pokémon Trainer from the Alola region. He meets Vaporeon in Vaporeon Gets Captured and ends up forming a strong enough bond with him for him to want to accompany him on the rest of his journey. He becomes Alola's second Champion in the series finale. He is loosely based off of the male character in Pokémon Sun and Moon.

Retrieved from "https://fanfiction.fandom.com/wiki/Eevee-lutions?oldid=211057"
Community content is available under CC-BY-SA unless otherwise noted.