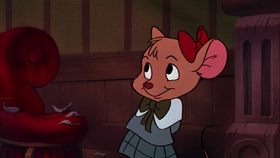 Find and play the music to the Loch Ness Monster

Gryffindor
"Everybody Loves Olivia" is the twenty-fifth episode of Total Drama's House of Mouse. It was originally aired on Disney Channel on November 5th, 2009.

Donald Duck feels unappreciated when everyone (both Disney Heroes and Disney Villains) seems to like Mickey more than him - but when Mortimer starts insulting Mickey on-stage during the club's Open Mic Night, Donald has a change of heart and stands up for his best friend, throwing Mortimer out to a rousing ovation. Meanwhile, the Gryffindor Girls including the hometown hero Olivia Flaversham journey to Scotland in search of the Loch Ness Monster - if "Nessie" really is a dinosaur, she might be a long-lost relative! Unfortunately, the Slytherins have beat them to it, and are busy training the enormous monster to attach the girls on sight. But both the Slytherins and the Gryffindors and Olivia are in for a shock when they find out that "Nessie" is just a baby, and her mom is even bigger!

Today's show was brought to you by: "Donald Duck"