Protector of Earthrealm, God of Wind

Fujin (風神) is a character in the Mortal Kombat fighting game series. The God of Wind and one of the Protectors of Earthrealm, he is the younger brother of Thunder God Raiden and one of the few playable Gods to appear in the series. He has been a supporting character throughout the series.

Fujin was one of the four guardians assigned by Raiden to guard and protect the Amulet of Shinnok and was the first of the gods that Bi-Han (then the Elder Sub-Zero) bested in order to acquire it (he is seen being torn asunder by his own tornado but survived the ordeal).

He remained inactive until Shinnok, a fallen Elder God, escaped from the Netherrealm and decided to attack the Eternal Palace of the Elder Gods. Fujin tried to defend the Palace and fell from the Heavens while fighting to protect it. He was pursued by Shinnok's Army of Darkness and was saved by Liu Kang, Kai and Raiden, just before the minions could finish him. Being one of the few remaining Earthrealm gods, Fujin joined Raiden in his battle against his old enemy, assisting the Earthrealm forces.

The Earthrealm warriors were victorious, and Shinnok was once again trapped in the Netherrealm. Fujin consulted with the Elder Gods, who revealed to him that he had a new task. Raiden would be ascending to the pantheon of Elder Gods, and he chose Fujin to be the new protector of Earthrealm. Fujin accepted the position and promised Raiden that he would not fail him.

Fujin became aware of a change in Raiden's personality. He saw that the thunder god, while still seeking to protect Earthrealm, had grown to be ruthless. Raiden was now commanding the reanimated corpse of Liu Kang, who was killing many innocent people for unknown reasons. Fujin allied with Kung Lao in hopes that they could possibly find a way to save both Raiden and Liu Kang.

He learned from Kung Lao that Johnny Cage was gathering the Forces of Light. Fujin took part in the meeting held by Cage and in there he heard about Johnny Cage's encounter with Shinnok, he did not believe Johnny to have psychic powers, but something mentioned at the gathering caught his attention. Kenshi, a blind swordsman, mentioned the brothers Taven and Daegon. Fujin had been a friend of their family for ages, and he had questioned their father Argus when the two disappeared. He realized that Argus placed them on a quest, but now this quest was becoming corrupted by evil. The God of Wind searched for both brothers, hoping to prevent their progress and learn the true purpose of their quest. He confronted Taven in a forest outside of the Red Dragon Clan's headquarters and urged him not to enter, but Taven did not obey. Taven and Fujin battled, but in the end, Taven emerges victorious and continued his journey, regretting to have fought an old friend. Fujin is not seen again in the konquest.

He would later join the Forces of Light in the final battle against the Forces of Darkness and presumably died along with the rest of the Kombatants.

A Date and a Destiny[]

Kung Lao had his first date with Aiko Krackle, they leaned in for a passionate kiss after how much she really liked their outing. Until she first noticed a distant cry coming from a random monk. Kung Lao's keen vision followed the uproar to the Wu Shi Arena, and it was an elderly man who seamlessly took out several of them! He demanded to find Earthrealm's Champion, then the defenseless monks pleaded for their lives that Liu Kang left. He then heard a tenor speak behind him, in came Kung Lao. The skillful geezer was enthralled, and he introduced himself as Kung Lao, the descendant of the Great Kung Lao; he challenged him to Mortal Kombat, and the old man accepted. Lao said he was the second best, next to Liu Kang, and took him on. After several minutes of strenuous kombat, the wind elemental easily won over Lao, even overpowering him with his more advanced aerokinesis! He held Kung Lao still before he was healed. The monks received minimal damage, and he went by the name of Fujin. He criticized Lao he still had much to learn, though he seemed to have the potential to meet and even surpass his ancestor. He wanted to train his aerokinesis, and if he's interested, he shall find Fujin back at the Arena, in preparation for a probable war involving the Elder Gods.

Two years passed and Fujin was still Kung Lao's mentor advancing his aerokinesis in the Wind World; Aiko decided to come with him and be his mediator while also honing her skills in kombat and enlightenment. Much like the couple, and Nightwolf, even Fujin received some vague, though disturbing, visions of an ominous man in dark robes, blue skin, and wielding a staff; he identified the monster as Shinnok. He strongly believed they were omens to the upcoming konflict in the heavens and sure enough, he saw a massive cloud and the weather turned sporadic. In terror, he theorized Shinnok escaped from the Netherrealm and the Gods were under attack! He teleported Lao and Aiko to the Wu Shi Academy via funnel!

He was then seen as he crash landed onto Earthrealm, specifically close to the Bayan Har Mountains. Liu Kang and Kai came to his aide as they fought off the ambushing Army of Darkness' infantry, before Nightwolf's Dragon Jet intervened. Raiden then took him to the Jinsei Chamber to heal after he warned the Kombatants as they must gather their allies once more to defend the Earth and Edenia.

Fujin managed to catch up with Raiden inside the prison of the Edenian Palace, only to have a distraught Liu Kang after Shinnok already took Kung Lao and Aiko into the Netherrealm! He and his brother offered to assist the Champion there and decimate their ancient nemesis once and for all!

Fujin, Raiden, and Liu reached Shinnok's temple, the Fire Well, but they arrived too late for Lao and Aiko had their hearts corrupted. While Shinnok stunned the brothers, Liu was barely a match for the cardiokinetic and his best friend. Shinnok drew the hero close and was about to waste away his heart until Nightwolf performed a ritual that allowed his and the compatriots' strength to cross into the Netherrealm from the Edenian Palace. With Shinnok weakened by his pure memories and thoughts, he lost the Amulet temporarily by Liu's strong Kick, though Lao retrieved it via Teleport, and Shinnok attached it to the Staff! By the time Hanzo and Kuai restored the REAL Amulet at the Temple of Elements, Shinnok's powers ran out and realized he only was using the duplicate! Raiden stunned the usurped couple before taking them to the Jinsei while Liu backed the hapless Elder God to the spiked Well! Fujin pushed the monk aside before he and Raiden forced Shinnok into the massive spikes below!! The two Gods became the new Champions and escorted the hurt hero back to Edenia!

Fujin then met Aiko and Kung Lao comatose at the Sky Temple. He first woke up the wounded former monk and assured Shinnok was out of the picture for the next millennial or so since the Amulet remained on Earth. He was glad Lao and Aiko weren't dead nor churned into Revenants like they feared the most.

Meanwhile, Raiden ascended into the heavens and chose his younger brother to be Earth's new guardian. He soon broke the news at the Elder Gods' chamber after one of the celestials briefed the elemental on his new assignment. Fujin was enthusiastic on accepting in being Earthrealm's protector, and Raiden warned the people are good though have a tendency to self-destruct. He assured Raiden he won't fail him. 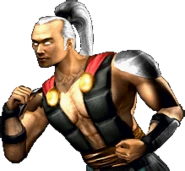 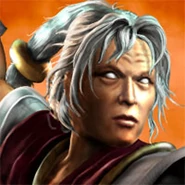