unknown, but hang out in the collapsed Cave of Wonders without Genie realizing

The Genie Belly Dancers (راقصات الجني الشرقية) are the beautiful and magical beings and are the supporting characters of the story about how Jasmine befriended them and met them in the cave of wonders when it was still collapsed.

The belly dancers were created out of Genie's powers when they were summoned for the songs, "Friend like me" and "Prince Ali." Since now that the Genie was free by Aladdin or nicknamed, Al, his now "Semi-Phenomenal Nearly-Cosmic" Powers can summon these belly dancers and the other summoned people, creatures, and objects Genie also summoned, at will without Genie noticing.

But even though they were created by Genie's magic, it does not mean they do not have magic of their own. Heck they share some of their own, mainly in their minds or even in their bellybuttons. Since now that the Genie is free, the belly dancers hang out with each other with usual girl time in the Cave of Wonders since it was still collapsed.

The Belly Dancers are very identical with each other, beautiful, young looking, and very slender figures.

The Friend Like Me Belly Dancers were each identical to each other, being barely clothed and a fine example of youth and beauty. They had dark hair arranged in ponytails, short see-through red skirts with red thongs along with red bras that showed much cleavage.

The Prince Ali Belly Dancers were also each identical to each other, being barely clothed and a fine example of youth and beauty. They had dark hair arranged in different styles, see-through pants attached to their small bikini thongs along with matching small bras that barely covered their breasts.

Of course they all share the same personality. But just like Genie, they too can be fun, and comical. But they can be quite sexy, calm, reasonable, and exotic. Fun loving like the Genie, they mostly enjoy belly dancing together, shaking their hips at each other, and secretly playing with their bellybuttons.

As much as they are sexy and sassy personality, they mainly enjoy belly dancing and playing with their cute bellybuttons like they couldn't know when to rest a bit.

Mainly there is no main history about these belly dancers, but they had been summoned by the all powerful Fun-loving, blue Genie of the Lamp. During the song, Friend like me, Genie summoned the first three Belly Dancers to dance around Aladdin, and the other five belly dancers were also summoned to be part of the entourage during the Prince Ali, Song. Even though they were not summoned a while or seen on screen afterwards, they can still be summoned secretly without Genie noticing in their hangout in the Cave of Wonders underground when he was wished to be free.

A while during his freedom but right after the events of the first movie and before "the Return of Jafar," Princess Jasmine was secretly teleported to the Cave of Wonders Undergrownd where it was still collapsed and where Aladdin unleashed Genie.

When Princess Jasmine meets the belly dancers in the cave, she seemed to be a bit confused at first, but noticed that they were the genie's summoned dancers. She wondered how they can still be around and know what had happened, but they answered by saying "that's our secret along with the Magic's secret."

Jasmine seemed to be enjoyed by their company and somehow found their bellybutton tricks a bit cute as she couldn't help but giggle as she found them as funny as Genie. The belly dancers also began their version of "Friend like me," to Jasmine as they danced around her, and demonstrated how they used their abilities by using their minds to make their bellybuttons do silly things, like swirling their bellybuttons in circular patterns, or even jiggling and shaking up and down. Jasmine giggled a bit as she joined in the Belly dance and they all shook their hips with each other, and belly danced together and playing with each other's bellybuttons.

After the song, Jasmine and the Belly Dancers had their conversation of how Aladdin did the right thing and fixed his mistakes before keeping his promises with the Genie after patching things up with Jasmine. They knew that it was getting morning so they all agreed to keep this a secret and between Jasmine and the Belly Dancers, right before one of them took Jasmine out of the cave and back to the Palace unnoticed so they can wait for her return at anytime and gave her a small orb to meet them at the same place whenever she wants and anytime she would like, before teleporting herself back to the cavern.

Now that the Genie has been freed and so was his magic, it would sometimes have a mind of its own and can secretly sent Jasmine and Genie's belly Dancers to the collapsed Cave of Wonders, for the whole night. As Jasmine wondered how that could happen, the belly dancers explained to her that sometimes Genie's magic can have a will of it's own though it is just a theory, but that the belly dancers can also have some magic in their bellybuttons. They explained that Genie's magic can sometimes summon them without Genie noticing it, and that they could dance together and play with their bellybuttons. They also knew that Al did the right thing of telling the truth and setting the Genie free like he always wanted.

Of course Jasmine danced with her new friends and also played with their bellybuttons. Also that the girls sometimes explained since the Genie's free, his magic can sometimes do things like summoning his dancers alone as they too found it odd even when they disappear and reappear by the genie's magic. Of course Jasmine and the dancers agreed to keep this between each other as the belly dancers got Jasmine out of the cave and back to the Palace before they disappeared themselves.

Since the first time they met, after Aladdin released the genie from his lamp, the Genie demonstrated his magical powers during the song, "Friend Like Me" and summoned the first three dancers to dance around Aladdin, before disappearing again.

Aladdin almost seemed to enjoy them but knew that Jasmine was the one he had a connection with. So the other five belly dancers were summoned as part of the Altarage parade on their way to Agrabah during the song, "Prince Ali." 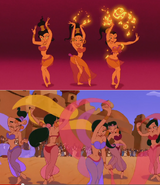 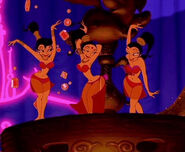 Add a photo to this gallery
Retrieved from "https://fanfiction.fandom.com/wiki/Genie_Belly_Dancers?oldid=278453"
Community content is available under CC-BY-SA unless otherwise noted.