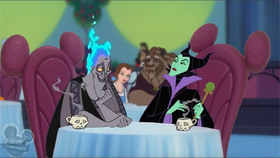 "Halloween With Hades" is the thirty-eight episode of Total Drama's House of Mouse. It was originally aired on Disney Channel's New For You Show! on January 5th, 2010.

It's Christmas Halloween day at the House of Mouse and when Hades' amorous advances are rebuffed by Maleficent, he turns to Mickey to learn how to win her heart. Meanwhile, Sunset Shimmer, Fa Mulan and Strawberry Shortcake learn the secrets of Aikido from master Karma Tupjuk, whose amazing martial arts skills let him perform superhuman feats! The three Gryffindor girls must use their new moves to protect their friend's Tibetan sanctuary from Scarlett and Wallflower, who want to exploit Tupjik's powers for their own nefarious ends.