Hell, also known as the Underworld, Hades, the Netherworld, the Abyss and countless other names is the spiritual realm of evil and the domain of Satan and his legions of demons and the damned. In non-Christian religions, Satan is replaced with some other arch-demon or death-god such as the Norse Hela, but in every depiction, Hell is described as the most terrifying, most horrible plane of existence where the wicked and sinful are punished for eternity (or at least for immensely long periods of time) for their sins - often in the most horrific of ways.

Traditionally in Christianity, the suffering of hell is envisioned as hellfire - a type of spiritual flame that is capable of burning the very soul of those who commit wrong and those sentenced to hell must endure an eternity of hellfire while also being tormented day and night by the minions of Satan...though Hell can be full of inmates who are masochists who would say "Thank you, sir. Can I have another hot spike up the jacksie?"

Hell can also be seen as a metaphor for a life without God (or other positive force) and some religions do not see Hell as a physical place but rather a state of mind caused by sin. Hell is similar to Purgatory but differs in the fact Hell is usually seen as a permanent state of suffering and evil opposed to Purgatory, which is traditionally seen as a place of temporary punishment before being admitted into Paradise. It is the opposite of Heaven.

Fun fact: in the multi-Universe, there's more than one Hell.

It's also known as the Evil Realm in Zelda series, the Netherrealm in Mortal Kombat, and the Underwhere in Super Paper Mario. It may also be implied that the literal planet for it is Fire Field in the F-Zero series. Emperor Mateus was once the ruler of Hell as he raised Castle Pandemonium.

Team Witness ventures into Hell and traverse thru 9 Rings in order to confront Lucifer and save Ichabod's tortured soul. They also come across familiar enemies too, including Jobe, Malcolm, Hawley, Minos, Minotaur, the Brothers Grunt, etc.

In the alternate ending, the six weren't successful. As they were able to reverse Ichabod's curse yet can't defeat Lucifer with Katrina and Benedict. This allowed only the Witnesses to escape.

There were some flashbacks involving Kung Lao and Liu Kang searching and fighting Scorpion, aside from several demonic cronies. They also saw Noob Saibot and Sub-Zero broke the news he may be in fact his brother. However, he couldn't take the heat.

Raiden mentioned that after Shao Kahn was destroyed, his soul may had been sealed in the Netherrealm. There was a tiny rip leading into it beneath the rubble of Kahn's Fortress in New York. Soon after, Shang Tsung and Quan Chi ended up there as the Brotherhood of Shadow were worshipping a fallen deity.

Shinnok escaped the Netherrealm via portal as the opal offered to Queen Sindel shattered! His Army of Darkness invaded the Edenian Palace along with Scorpion, Mileena and Reiko. Quan Chi also belonged there until he and Tanya slipped away.

Shinnok soon dragged Kung Lao and Aiko into the Netherrealm, and took them to his horrid palace, the Fire Well. He incanted and opened their hearts with evil utilizing Aiko's abilities while disguised as a wounded Kai. Liu Kang, Raiden and Fujin caught up to them, only it was lure them there! His new followers incapacitated the heroes, until Shinnok's Amulet was restored in the Temple of Elements, thus disabling Shinnok's prowess! Raiden managed to stun the mesmerized duo and warp them to the Jinsei Chamber. The Gods finished him off and his soul remained trapped endlessly! Raiden created a portal for the trio to escape before the denizens should get reckless and have no one to restrain them! 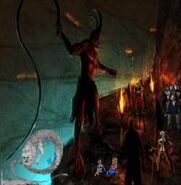