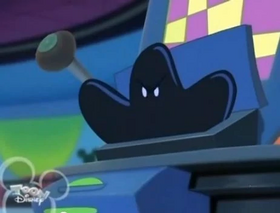 Solve a "crime" mystery, and capture the Phantom Blot

Beth and Owen
"House of Crime" is the fourty-sixth episode of Total Drama's House of Mouse. It originally aired on Disney Channel on January 14, 2010.

Right as Mickey begins hosting today's show, the guests start crying out to him that they're being victimized by a string of inexplicable thefts occurring at that very moment. Ludwig Von Drake then shows up and unveils his newest invention, the Crimeputer (Crime Computer), which he will use to solve the mystery. The machine gives its first clue - that the mystery criminal is "someone in disguise." Goofy starts inquiring all the disguised villains in the House, but this does not help. Von Drake figures that all the villains look guilty, so Mickey has them all caged up. But then the lights briefly go out, and when they come back on, they find that the villains have now been abducted. Von Drake assures the remaining audience members that his Crimeputer will catch the crook before the end of the show. So Mickey orders the final four contestants to solve a crime mystery, and find the mystery criminal. The Gryffindor Girls and the contestants agreed, but Gwen begins to freak out, as her greatest fear is being buried alive (and thus, being under arrest to jail), but she reluctantly agreed to the challenge.

After the contestants and the girls began the challenge, Mickey asks Minnie, Daisy, and Donald if anything else has gone missing. Goofy reports that plenty of things have been stolen, and also adds that Gus says someone stole all the crabs ("except for Donald", he remarks, much to Donald's umbrage). The Crimeputer then provides the next cryptic clue - that the culprit is "someone who's been here since the beginning." Clarabelle begins spreading rumors over one of the crew members possibly being the culprit, and then the Crimeputer provides another clue - "someone who holds a grudge." Meanwhile, the culprit conducts some more experiments with the computer, trying to make it do magic again, but nothing happens. Suddenly, the rest of the Mane Seven appear before her. Pinkie Pie is surprised to see culprit at the studio after what happened at the audience, but the culprit uses the Crimeputer to make them disappear. This time, the computer reacts and magically pulls the girls, Ursula, Olivia Flaversham, Minnie, Daisy, and Strawberry Shortcake inside, leaving behind Fluttershy's barrette. In the mall, Sunset tries calling her friends, but all her calls go to voicemail. However, the girl introduces herself as Starlight Glimmer, Mr. Globwobbler's student. She vents her worries and concerns to Starlight, and she tries to offer advice, but Sunset instead waits for a reply from Princess Twilight. As Sunset continues to worry about another magic incident happening, Starlight tells her to trust that things will work themselves out. Taking Starlight's advice to heart, Sunset shows her to the studio. Donald, still taking offense at Goofy's "crab" remark, is suspected of being the thief and locked up in the backstage elevator, but then Clarabelle reports to them that Minnie and Daisy is missing now, thus validating Donald's innocence. The Crimeputer provides the next clue - "someone who is very near" - before the thief then steals Mickey's clothes, along with the rest of the audience. Meanwhile, Sunset, Duncan, Gwen, Molly, Zoey, Owen, and Starlight enter the studio, where Sunset sees Fluttershy's barrette on the floor, and then they realized that somebody coming near to get them. They split into groups, with Gwen alongside Zoey and Starlight.

While the contestants tries to find the culprit Von Drake, Clarabelle and Beth are suddenly kidnapped. Mickey reads one more clue from the Crimeputer - "the person you least suspect" - which leads Donald and Goofy to believe he's the culprit. They chase Mickey through the club but then suddenly disappear just as they are about to pounce on him. Mickey begins to think he somehow is the thief, at which point Chief O'Hara comes in to arrest him. While Gwen, Molly, and Zoey are still trying to find a way out, Gwen takes note of and fearing every sound, especially when Zoey and Molly suddenly disappears. One by one, each members is captured, and deposited into a crimeputer by the culprit, eventually leaving Owen and Gwen as the last persons standing. When Chief O'Hara finally finds him, he takes him to the Crimeputer too.

Starlight and Gwen were horrified, but they decided to work together to find the true culprit. Together, they used mystery skills to find, and in no time at all, they found the true culprit: the Phantom Blot, who already send Minnie and Daisy in a cage. Gwen and Starlight followed the Phantom Blot as he goes out into the mall and starts walking around in phantom ink form. The mall patrons run away from him and scream in terror, but Starlight tries to catch the Phantom Blot with the rope, but Phantom Blot muscles were strong and broke it. Gwen, with her lightsaber in hand, battles the Phantom Blot and they locked in a fierce combat. Then the Phantom Blot tried to get away in his blimp, but Starlight grabbed him and pull him down with the blimp. With Starlight uses the signal to fire, Gwen picks up Mickey's bazooka and shoots the blimp, causing it to popping it to the spire at the top of the House of Mouse building. Later, after Gwen has freed everyone, including her friends, from their imprisonment within the Crimeputer where the Blot had stuffed them, Mickey announces that Gwen won the challenge, much to everyone's delight. Later, Von Drake announces that he has made an improvement to the machine - it now not only solves crimes, it also catches culprits. Von Drake then remarks that his cartoon that they just showed was so funny that it almost made him die laughing. Chief O'Hara, however, takes that statement seriously (it is apparently against the law in Toontown to make cartoons that can cause people to die laughing) and has the Crimeputer drag Von Drake off to jail ("Good thing I've already invented this get-out-of-jail breaker!").

At the Gilded Chris ceremony that evening, all the votes are shown individually. Beth considers voting Gwen for being a winner, but ends up voting Owen for being a threat. Next Owen votes for Beth because she eats more than the couple. Gwen votes for Beth for not being a challenge for long. Finally, A tired Duncan is shown, but his vote is not revealed. Chris announces that the first two Gilded Chris Awards go to Gwen and Duncan, then Mickey announces that since both Owen and Gwen voted for Beth, she's eliminated. Then Mickey announces that both Beth and Duncan voted for Owen, so he too was eliminated, making it a double-elimination tonight. So, they ask Owen to give a farewell speech.

Owen starts his speech by thanking the "Gilded Chris Academy." He then begins to go into small hallucinations. He thanks Duncan (picturing him as a hot dog), Gwen (picturing her as a vampire), Beth (picturing her as a drumstick), and Mickey (picturing him as a cheese with ears). As his speech has gone on for too long he gets cut off and starts thanking people quickly. Gwen, Twilight, Zoey, Duncan, and Beth then throw their Gilded Chris awards at Owen so he can eat one. After Beth and Owen are away, Mickey proclaims Gwen and Duncan the final two, then joins them from the frame, and tells the viewers to tune in for the finale.

Starlight Glimmer makes her appearance on the House of Mouse.

Beth follows Meeko inside a cave.

Meeko asks Beth to play a game of ping pong.

Beth agrees, but says they need to leave after a gourmet dinner.

Duncan with a scared Owen.

Owen gets cornered by the Phantom Blot in the middle of the studio.

Zoey and Molly Wei is abducted.

Gwen is curled up scared in the confessional.

Beth votes for Owen due to being a bigger threat.

Owen votes for Beth, since Gwen and Duncan are love couple.

Duncan votes for Owen while asleep.