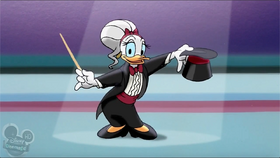 Bring the baby turtles to the House of Mouse before 10:30 PM

Katie
"House of Magic" is the third episode of Total Drama's House of Mouse. It originally aired on Disney Channel on September 17, 2009.

Daisy convinces Mickey to let her perform a magic act in the show, but accidentally makes the audience (and later the club, minus the screen) disappear.

Magical consultation for the House of Mouse courtesy of: "Magic Mirror Consultant"

Katie and Sadie in the bottom two.

Katie is eliminated from the game.