Ice Jeweler (ヒスイ の 氷: Ice Jeweler, Hisui no Koori(literally "Ice of Hisui")) is an upcoming fanfiction anime by LDEJRuff, and the upcoming sequel of Jolt Icejin. It mainly focuses on an extraterrestrial Jewler named Hisui Diamond. Like its prequel series, and Flame Icejin, it combines the worlds of certain cartoon shows, and introduces new OC characters.
WARNING: Spoilers ahead...

Characters from The Powerpuff Girls

Characters from Rugrats/All Grown Up!

Characters and O.C.'s yet to appear

Characters from Sonic the Hedgehog

Characters from Monsters vs. Aliens

Characters from The Lion King, Timon & Pumbaa and X-Mammals

Characters from The Missing Link/B.C. Rock

Characters from My Little Pony: Friendship is Magic

Characters from The Guardians of Childhood book series 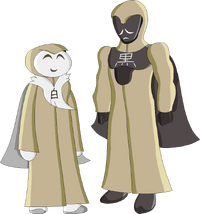 Jewelers are a race of Icejins from the Hoseki planetary system. They got their species name because of their jewel-like radience, and the jewels on their foreheads. They are about as inteligent as the Icejins, and can speak as many languages as the Icejins can, including the native Icejin tounge. They are inspired by Queen Breeza's fanfic "The Jeweler Icejins".

In this series, there are three powers that have never been revealed before...

...it is said that three characters from any of the previous two series would bear these powers.

Retrieved from "https://fanfiction.fandom.com/wiki/Ice_Jeweler?oldid=157444"
Community content is available under CC-BY-SA unless otherwise noted.