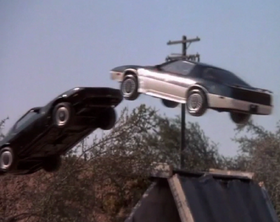 "KITT vs KARR" is the twenty-fourth episode of Total Drama's House of Mouse. It was originally aired on Disney Channel on November 4th, 2009.

Everyone is fed up with Goofy's clumsy antics, so Minnie hires José Carioca to teach Goofy poise and grace and make him "un-Goofy". As it turns out, though, some of the guests, as well as the staff, miss the old Goofy, so they get Panchito Pistoles to undo José's training. Meanwhile, K.I.T.T.'s evil prototype K.A.R.R. returns, seeking to destroy Zoey, Gryffindor girls, and K.I.T.T. With the help of Sunset Shimmer, who had lost her Galactic Emperor master, K.A.R.R. is a force to be reconned with, and will stop at nothing until its had its revenge.