Kai was once a member of the secretive White Lotus Society. He had learned his skills from the great masters throughout Asia. He journeyed to the far east where he met Liu Kang who happened to be in America at the time, recruiting to train a new generation of Shaolin warriors.

During the events of Mortal Kombat 4, Kai went with Liu Kang to China to become a Shaolin warrior. However, his training was interrupted with the invasion of Shinnok and his dark legion into Edenia. Liu Kang and Kai found Fujin who fell from the Heavens while battling the forces of Shinnok. The god of wind was unconscious and was about to be killed by Shinnok's Army of Darkness, when Liu Kang and Kai interrupted the demons and saved him.

Later on, Kai and Liu Kang joined Raiden in his efforts against Shinnok. Once Shinnok was beaten, Kai decided to wander the Earth on a quest for self-enlightenment. As a blessing from Raiden as he prepared to ascend to Elder God, Raiden entrusted his Lightning Staff to Kai to help him on his quest, and perhaps find his way into immortality.

Kai would later join with the Forces of Light in the final battle of Armageddon, where he would die alongside the rest of the Kombatants.

He pretty much portrays the same way as he would in the MK4/GOLD game.

He decided to stick with Liu Kang in their fight for Edenia, and he stuck close to his sensei's side, even when the Army of Darkness was too overwhelming for the team! Liu urged everyone to split up and ordered Kai to stick with him to which he obliged without question.

Liu and Kai continued their brawl, though the generals quickly overwhelmed them! Kai then gotten the orders to in Chinese to hide while his partner transformed into his Dragon Animality obliterating the oncoming wave! He felt jealous, and despondent, as one sneaky elite broke thru and knocked him down! Liu came to his aid and reminded him.

"Damn it, Liu! I'll never be as good as you! You being the Mortal Kombat Champion and all..!"

"Remember what I told you, Kai. There's more to martial arts than just fighting. You must become one with your inner spirit. Only then can you summon your real inner strength and have that power that you've only dreamed about."

Kai still felt envious, and he followed him to a nearby Tomb, thinking that was a secret portion of the Edenian Palace. Only to be ambushed by one of Shinnok's generals, Reiko! Liu offered to challenge the "younger Shao Kahn" while Kai took on his men. Reiko was defeated, though Kai was suddenly abducted, leaving the Champion alone and lost!

Kai was later seen inside the Edenian Palace Prison by Kung Lao and Aiko. He implored for help, though Lao was distracted by Reiko's sudden ambush! He urged Aiko to revive Kai as much as possible, using the elite general as an energy source. He watched Lao decimate him while Kai was being healed by the green streaks of energy. By the time Reiko was shattered by the aloft fan, he was fully energized! He stood still as he observed Lao and Aiko leaving the prison as he dropped and turned an open palm to them... Aiko felt her heart speed up, then suffer from intense pangs! Lao followed suit and he noticed from his blurry vision it was Shinnok in disguise!! The whereabouts of the real Kai remained a mystery...

That was until the heroes noticed Kai was mingled with the imprisoned Edenians. He was one of the dying prisoners, as Reiko warned there wasn't much time for them, since Shinnok was willing to let them wither before churning into his followers. Kai was alive and well a few days after the Netherrealm War and Liu shown him the rounds in China.

Unlike his ending in MK4, he didn't embark on an enlightening journey with Raiden's staff. He decided to stay and train as a member of the Shaolin instead. 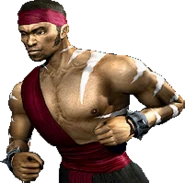 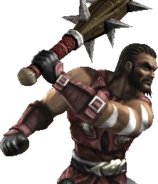 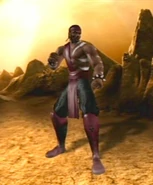 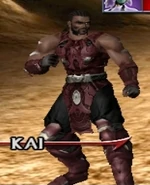 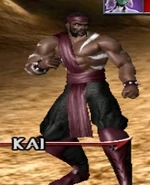