Training as a Shaolin, archery

Raiden (formerly), his life destroyed after losing his uncle

Kung Jin is the nephew of Kung Lao and is a playable character in Mortal Kombat X.

Kung Jin made his debut in Mortal Kombat X, serving as one of the protagonists in the game's Story Mode. As a child, Kung Jin admired his uncle Kung Lao and considered him a hero. After his uncle's death, the Kung family lost their family fortunes and moved to the United States of America. Because of this, Jin became a thief and blamed Raiden for the death of his uncle. However, after meeting the Thunder God, he let go of his resentment and trained under the White Lotus Society, who Jin originally thought would not accept him because of his homosexuality. Having learned much of Outworld and the ways of the Shaolin, Jin now fights to protect Earthrealm in honor of his family.

Like his uncle, Kung Jin excels with projectile weapons, using a bow and arrow. However, he also seems to have inherited Kung Lao's immaturity, impulsiveness, and ego, as he will talk offensively even to his own team. For example, Jin initially does not respect Cassie Cage's leadership and will make rude remarks to Jacqui Briggs about her father being a Revenant. Despite his shortcomings, Kung Jin's shrewdness and street smarts prove useful to the team and is a firm believer in second chances and redemption, due in part to his own experiences as a thief. Over time, he comes to respect his team, going as far as risking his own life in kombat to protect their lives.

Kung Jin was only six when he was first seen being carried to his room by his uncle's loving arms, as well as being tucked in. He was so ecstatic to see him after a few gruesome weeks in Outworld and the Tarkan attack. He always believed Lao has what it takes to be the best defender of Earth next to Liu Kang and uphold their ancestor's legacy. He went to sleep before the random monk was distraught of Lao and Liu having the eternal curse as MK Champions.

Jin was seen again reuniting with his lost uncle after three months. Lao then introduced Aiko to him and to his fellow monks. While he needed to take care of some business with the elders, Jin joyfully offered to show Aiko the rounds.

Jin and Aiko enjoyed a hearty meal consisting of sushi, white rice and Oriental vegetables. Jin was ecstatic that the monks weren't limited to warriors, but also very talented artisans, agriculturists and scholars. He wished to follow in his uncle's footsteps and join the White Lotus Society once he's old enough. He then shown Aiko the Academy's most sacred place, the Dragon Grotto housing the Jinsei, Earthrealm's lifeforce. If they're qualified, the monks rotate and guard the Jinsei from evildoers on usurping and corroding the sacred water. He stated that Raiden and a few warriors occasionally visit the cavern after battle to heal, the effigy of dragons was crafted in gold and limestone to honor the Elder Gods, and they'd offer food, gold, and other offerings to them. He said Lao was one of those monks, if they should traverse thru the traps they'd set. Later on, the sky became opaque, and the Academy was ransacked by Kahn's extermination squads! He and the hapless monks stayed underground while he tearfully reunited with his uncle. He promised to return as Raiden, Lao, and Aiko teleported to Nightwolf's coastal land.

Kung Jin stayed within the Dragon Grotto until Earthrealm and Outworld restored themselves by the time Liu Kang destroyed Kahn! He excitedly reunited with his uncle and Aiko! He was also enthusiastic on her staying at the Academy training herself as one with the White Lotus Society following his uncle's footsteps and exploring more of the monks' unique culture. She can also be a possible babysitter and adult companion to him... 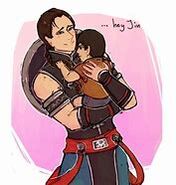 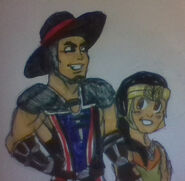