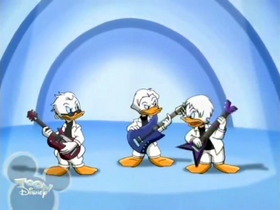 Lindsay
"Music Day" is the fourty-forth episode of Total Drama's House of Mouse. It originally aired on Disney Channel on January 12, 2010.

It's music day at the House of Mouse, but the Quackstreet Boys (Huey, Dewey, and Louie) and the Chipmunks (Alvin And The Chipmunks) have broken up. Mickey, Donald, and Goofy have to find a way to get them back together before the guests go into a riot. The castmates then move on to the first challenge, which is guitar playing, but they couldn't find the "big stadium" Mickey told them about, which turned out to be the Chris Awards theater. The castmates are told that they need to play the notes that correspond with the screen, and that they will be electrified if they miss a note.

Leshawna plays too fast and her guitar starts burning, so Goofy throws water on it and electrocutes her. Owen falls off the stage and is eliminated. Lindsay gets electrocuted because of not playing at all, but asking Mickey if he has a red guitar that went with her outfit. Beth's guitar simply explodes, leaving Duncan and Gwen the only two left in the challenge. Duncan plays the guitar very basically, while Gwen does a tremendous amount of tricks. Duncan then smashes his guitar, and Mickey says that he won, as Gwen "tried too hard." Duncan teases her about his victory, to which Gwen responds by smashing her guitar against Duncan's groin, knocking him to the ground.

After an attempt to speak to each of them individually fails with Mickey, Donald, and Goofy each trying a different means to convince the boys to reunite, through begging, bribery, or in Donald's case, angry ranting, Mickey, Donald, and Goofy resort to dressing up as the Quackstreet Boys and performing in their stead, just as the boys, the Chipettes, and the Chipmunks are about to individually leave the House of Mouse in separate taxis when they hear Mike introduce them, raising their suspicion as to how they are going on stage to perform inside when they were about to leave outside. When they chipmunks reenter the club, they are shocked and infuriated to see Mickey, Donald, and Goofy ruining their good reputation with their horrible playing, and even getting electrocuted and burnt for their trouble, before being booed off the stage by the disappointed crowd. At that point, Huey, Dewey, Alvin, the Chipettes, and Louie take the stage to save their rep and satisfy the crowd, thus reuniting the band and saving Music Day.

They then move on to the next challenge, where they must maneuver through a red carpet. Duncan, having won the first part of the challenge, is given the backstage pass, so he'll be able to start halfway.

Gwen goes first, greeting and posing around the photographers and fans, while rushing through the obstacles. Duncan goes next, being rude to the photographers and all of the fans, save for the groupie, to whom he gives his phone number. Since Gwen grabbed the swag, she gets to keep what's inside: Chris's autobiography, volume I.

When Duncan is up, skipping half the red carpet, he spits, flips off and writes his number in different paparazzis, smacking away the sandwiches and breaking the other two standees. Owen then goes, tripping and rolling down the red carpet, causing Chef to have to duct-tape the door back together. Beth loses her glasses on her turn, and ends up tripping and falling, much like Owen, making Chef duct-tape the photographer back together too.

Leshawna goes next and starts out okay, while getting the Rock and Roll symbol incorrect, but when Duncan tells her to hurry up, Leshawna then goes, dancing and rolling down the red carpet, causing Chef to have to duct-tape the door back together. Lindsay is the last to go and she walks slowly down the red carpet, greeting and posing for the fans and the photographers. Due to this, Lindsay has the best photo and also did the least amount of damage, thus winning the challenge. Gwen is shocked about this, saying that she clearly did the best job of posing the paparazzi. Mickey then says that the objective wasn't to dodge the paparazzi, but rather, to properly expose yourself to them, before adding "and Lindsay exposed."

The third challenge for the castmates is to trash a hotel room. They all go at the same time, but Lindsay earns extra time at the end for winning the previous challenge. Leshawna smashes a phone; Beth breaks a lamp and a mirror; Owen finds a penny under a couch.

Meanwhile, Lindsay is giggling while jumping on a circular sofa chair, and Owen tries to join in on the action, but he lands on Lindsay when he jumps.

Duncan and Gwen are, once again, the best castmates in the challenge. However, Gwen using her lightsaber, and destroys the entire set, including the lights, a microphone, and the set walls.

Gwen ends up smashing so much that Lindsay has nothing left to break when she got her extra time. Because she destroyed almost everything, Gwen wins invincibility for the second time.

At the end of the episode, the boys descend into another heated argument over who leads them in their next song, much to Mickey's disgust and annoyance.

At the Gilded Chris Ceremony, the contestants are seen voting, with Gwen notably voting for Lindsay, and Leshawna for Duncan. Lindsay is seen looking at Beth, smiling, and closing her eyes while she voted on her voting device.

Mickey then distributes the awards to Gwen, Beth, Leshawna, and Owen, leaving Lindsay and Duncan in the bottom two. Duncan begins to look nervous (since it is his third ceremony being in the bottom two), and Lindsay believes that, with three votes against him, it will be a tiebreaker. The last Gilded Chris, however, goes to Duncan, meaning that Lindsay has been eliminated. Lindsay and Beth are both confused, since three people were supposed to vote off Duncan. Mickey announces that, while Leshawna and Beth did indeed vote for Duncan, Lindsay had accidentally voted for herself when she looked at Beth, and doesn't pay attention to who she voted for. This, along with Duncan's, Owen's and Gwen's votes, ends up getting her eliminated. The castmates are shocked, and Duncan begins to laugh.

Lindsay and Beth say goodbye to one another, each of them saddened at having to be separated. Lindsay reminds Beth that friendship is forever, and thus it is more important than money, and Beth replies by saying that's the smartest thing anyone has said all season. Lindsay then leaves in the Lame-o-sine, before signing off the episode.

Lindsay is electrocuted for making a mistake.

Owen plays the guitar excitedly, but later falls off the stage painfully.

Duncan only plays every tenth note on his guitar. 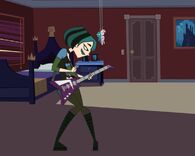 Gwen shows off her guitar skills.

Alvin and the Chipmunks and Chipettes performing to the cheering crowd.

The "fans" that the castmates have to pass through.

Duncan flips off the autograph hound.

Duncan signed an autograph on a cardboard cutout groupie's belly. 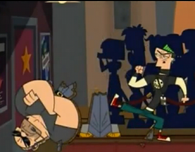 Duncan kicks the bodyguard cutout in half.

Owen rolls down the red carpet.

Lindsay grins as she begins her walk down the carpet.

Lindsay poses for the paparazzi.

Lindsay poses again for the paparazzi.

Lindsay kisses the bodyguard standee to get by. 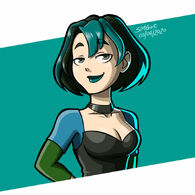 Gwen posing in her photo.

Lindsay posing in her photo.

Gwen reacts to Lindsay being the winner of posing Mickey picked.

Beth breaks a mirror in the third challenge.

Lindsay jumping on the couch…

…until Owen cannonballs onto it

Lindsay's reaction to Owen landing on her. 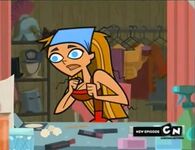 Lindsay is disheveled after Owen lands on her.

Lindsay votes blindly, due to Beth distracting her.

Duncan frets at the fact that he is in the bottom two once again.

Lindsay and Beth grin smugly at each other, thinking that their alliance will eliminate Duncan.

Duncan gets the last Gilded Chris Award, much to everyone's shock. (Ignore Courtney and Harold)

Lindsay is confused what Mickey was trying to say as goodbye.

"Friends are worth way more than money!"
– Lindsay

Lindsay sadly walks towards the Red Carpet of Shame.

Lindsay says her final "goodbyes" before entering the Lame-o-sine.