Nepgear is the human form of Purple Sister and also the little sister of Neptune. She first appears in mk-2 and in the manga.

In mk2 it's up to the little sisters to save their older sisters. Much like her sister in the previous game, Nepgear is the main protagonist. She's the character controlling everything, such as who joins the party, events, and ending.

Nepgear and the others sisters are set to return in Hyperdimension Neptunia Victory.

Nepgear uses a sword in human form. In HDD form she uses a gun blade.

Also, she is the main protagonist of Ultimate Dimension Nepgear.

In contrast to Neptune's hyper active and energetic behavior, Nepgear is a very shy girl who will over-apologize for even the tiniest of things. She's somewhat timid when it comes to things and people but friendly otherwise. Once she has made a friend, no matter what they think of her later she will hold them closely, such as when Uni angrily left and began to hate Nepgear upon finding out that Nepgear fled and left their sisters behind.

Perhaps the only thing she shares with her older sister is the fact she is also an airhead. Not as much as Neptune to the point it's barely noticeable in comparison. Another thing she shows is sometimes a lack of sanity (though nowhere near as much as Neptune) and being somewhat naive. She is very respectful to others and has a very close bond with her sister. Who addresses her as "Nep-Jr.", while Compa likes to address her as "Gear-Chan" or in the English dub, "Ge-Ge."

Nepgear has a tendency to go from being confident to scared whenever something bad happens. This is likely the trauma caused by her capture and imprisonment at the graveyard with her sisters for three years. Thankfully though, she is quick to snap out of it whenever her friends are in trouble or when they encourage her. Even Neptune seems to realize this at one point and even tells it to Nepgear to help her gain her confidence during their final confrontation with Magic the Hard.

Nepgear is supposedly very popular among the boys as Neptune says how Nepgear was always turning down boys for dates. She also can be teasing now and then, such as saying "If you be a good boy, I'll give you a compliment" and teases IF when she begins acting bashful and sensitive around Compa after a scene/event takes place...

Much like the others, when reaching a certain point Nepgear can transform into her HDD form: Purple Sister!

At first she loses this power, but during her first battle with Linda an injured IF lends her power to Nepgear to kickstart it and gives her back her ability.

Her personality so far seems to be somewhat the same when in comparison to Neptune's, whose personality changes to more confident, less air-headed, and serious. It's possible she may be less shy and more open in this form, and she seems to be more confident in herself too. She is still very kindhearted and will show mercy.

Nepgear's main color in HDD form is white with lilac extra pieces. However, her power up form is a lot more revealing then the first and Purple Heart's combined. The color scheme going to Black-blue and bright lilac.

In terms of appearance Nepgear seems to be older then Neptune, and is noticeably taller then her older sister. She is a fair-skinned girl with long lilac-purple hair almost waist in length with few loose strands of long hair curling down. Her bangs are usually kept neatly brushed. Her eyes are slightly darker.

Nepgear's outfit is somewhat similar to Neptune's but with more reserved styling, almost resembling a school uniform consisting of a white jacket-dress with purple lining consisting of thin double white stripes. A white choker, and around her neck is a pale yellow ribbon/ascot like piece with a N in the center. At her chest is a small pink marking while the pockets and buttons are purple. On her right leg is a white belt like purse object and she wears pink and white striped socks with white and purple shoes very similar to Neptune's own. In her hair she wears a single direction pad button.

As Purple Sister, she looks to be the younger sister then, being shorter/smaller then Purple Heart.

Her hair becomes a brighter shade with a very slight pink tone added and lengthens to her knees while her bangs and side parts before the ears also lengthen. Her eyes turn a bright blue color and her hairclip is now a round white piece with a blue center. While her primary HDD form color is white, Purple sister is usually seen in the upgrade form consisting of a black bikini-esque outfit with parts of purple and smaller blue glowing pieces. The top/chest part is connected around the neck while her gloves and boots are above elbow and knee length. The hair piece is black.

Her normal HDD form resembles a white bathing suit with a revealing chest piece colored a bright lilac shade. It connects around the neck with similar gloves and boot pieces. It appears this will be her HDD form for Neptunia Victory.

Nepgear is a well-rounded character who is arguably may be the strongest in the second game. While her stats may not be as high as her sister, she has strong attack power that can do good damage to bosses. She also possess strong magic power, very good defenses, decent avd and speed, and strong tech and luck. Her HP and AP are also high.

Nepgear is also somewhat broken, due to a few reasons. The first is her special ability to allow her partner to disable the damage limit. This allows for attacks to do more than 9999 damage and can be dangerous when using certain partner skills. She also has a move called Celestial Severance that when she is in HDD form can kill bosses in two to four uses. With the exception of Blanc and Noire, Nepgear can achieve special pair combos depending on who she is paired with. All four sisters together can also execute a special move. 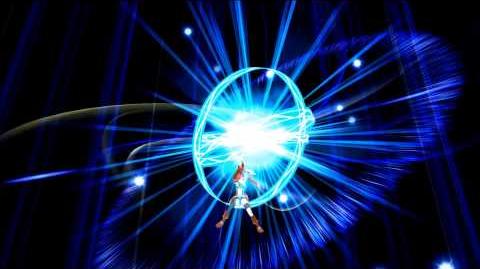 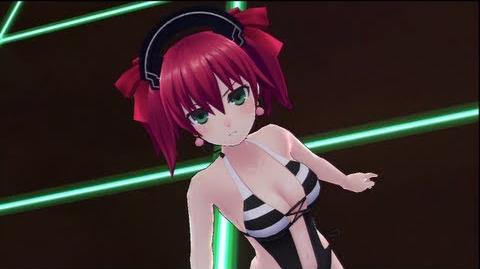 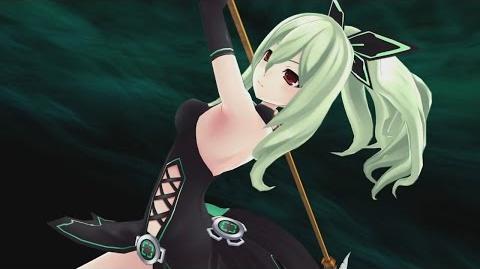 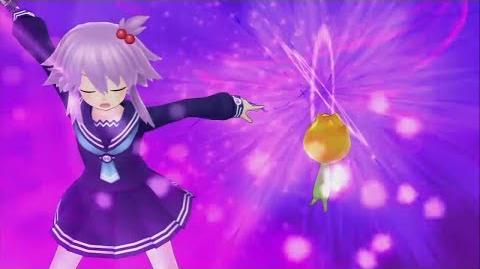 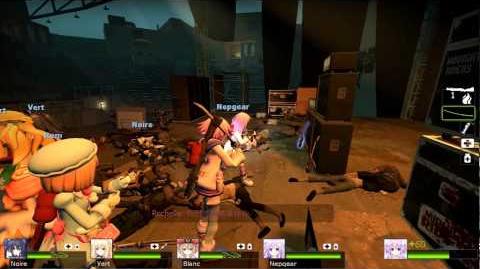 Retrieved from "https://fanfiction.fandom.com/wiki/Nepgear?oldid=200861"
Community content is available under CC-BY-SA unless otherwise noted.