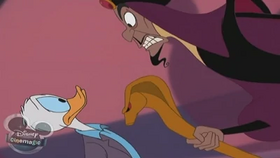 Noah
"Noah's Lamp Trade" is the ninth episode of Total Drama's House of Mouse. It originally aired on Disney Channel on October 6, 2009.

Taking advantage of Noah's jealousy toward Mickey, Jafar hypnotizes Noah into believing Mickey is not his friend and orders him to bring him "the lamp." However, it's not the lamp from the Cave of Wonders that he wants; it's a decorative one Mickey keeps in his dressing room. Meanwhile, Goofy and Gus Goose attempt to find the cause of all the missing food (Gus).

As the show begins, Mickey comments that it's time to tease Donald that he's a big ham, which hurts Noah's feelings but Mickey cheers him up by saying it was just a joke. Suddenly Jafar appears in front of Noah because he heard everything and when Noah comments that Mickey is his friend, Jafar hypnotizes him with his snake staff telling him that Mickey was not his friend and to do his best to get rid of him with the condition after giving him the Slytherin's lamp, Noah finally accepts and goes in search of the lamp.

Meanwhile, Goofy was already delivering the food to the other customers, but soon they discover that there is no food on their plates, Goofy becomes suspicious about the fact that there is a food thief in the club, so to do so he decides to recruit Gus (unaware that he was eating the food) to find out who is responsible, after which Mickey announces that this will be a lamp search challenge. Gwen and Courtney chooses Cody and Noah to the challenge and two friends send off to the prop room, and Mickey puts on the first cartoon.

After the cartoon is over, Mickey tells Minnie that he hopes Donald didn't have a hard time with the prank, so he puts her in charge of keeping an eye on him since Daisy saw him talking to Jafar. Meanwhile Cody and Noah goes down to the prop basement to look for the lamp, on the way, a magic broom follows him throughout the basement until he hits a box that contained Noah's deluge, after that Noah finds another box that contains the lamp, before After taking it, he finds another box that says "Forbidden Treasure" and decides to take it too, but before he leaves, the voice from the cave of wonders begins to call him unfaithful for grabbing the forbidden treasure.

Meanwhile, in full concert, David Q. Dawson finds a cheese tied to a mousetrap, but Basil of Baker Street just appears, who stops him by telling him that it was a trap, which was part of Professor Ratigan, meanwhile Mickey a radio to present a cartoon of Goofy and says that not even he could have said it better.

While Goofy was still investigating the mystery of the food thief, Mickey decides to present a show of Mrs. Potts and her cups, but at that moment the show is interrupted with the Magic Carpet saving Noah who is sent flying towards Jafar, Mickey tells him tells everything to Goofy and Jafar explains that he did not want the genie lamp but he wanted Gryffindor's lamp, Cody gives the lamp to Jafar who takes it with him, soon Goofy begins to remember about Jafar's promise and that it was that he had to get revenge on Donald and not on Mickey which causes him to turn him into a real ham by fulfilling Mickey's prank.

At the Gilded Chris Ceremony, Noah is voted off. Noah shrugs it off, strapping his bagpack on and clearly telling Owen about Courtney, "Beware of Jafar's miss!" before taking the Walk of Shame.

When there was nothing to do, Minnie motions to Gus to which Gus sees Donald turned into a ham and starts chasing him, Minnie tells Mickey that this is the food thief's solution, while Goofy is also chasing Gus, Mickey is about to close the show but is interrupted by his friends and by the magic broom that was in the basement, he finally gives up and lets Mike take care of the sponsor, finally Mickey says goodbye to everyone.