The story takes place in a Alternate Universe at the year 1648 in the Testament Era. In the bloody Sengoku Period, or Warring States Period, of feudal Japan (or elsewhere take place in the future), disaster strikes as the reenactment of the Anglo-Spanish armada battle was about to start, ushering all to the world of Warring-State Period. What impact will they have on a world teetering on the edge of destruction? What impact will this world have on them? Whatever happens, beyond the horizon; the apocalypse lurks; Genma returning (spoiler), and that "Him" might have something to do with it.

In the near future, humans abandon a devastated Earth and travel to outer space. However, due to an unknown phenomenon that prevents them from traveling into space, humanity returns to Earth only to find it inhospitable except for Eurasia. To accommodate the entire human population, pocket dimensions are created around Eurasia to house the populace. In order to find a way to return to outer space, the humans begin reenacting human history according to the Holy Book Testament. But in the year 1413 of the Testament Era, the nations of the pocket dimensions invade and conquer World, dividing the territory into feudal fiefdoms and forcing the original inhabitants of Japan to leave. It is now the year 1648 of the Testament Era, the refugees now live in the city ship Musashi, where it constantly travels around Eurasia while being watched by the Soviet Union, the authority that runs the re-enactment of history. However, rumors of an apocalypse and war begins to spread when the Testament stops revealing what happens next after 1648.

A Wikia Contributor: Yeah, originally, I was given a title Log Horizon in the Middle of Nowhere in which crossover between Log Horizon and Horizon in the Middle of Nowhere. I'll never forgot about Nobunaga The Fool because setting place in robot war (badass). Then I will put the NTF crossover with Dai-Shogun: Great Revolution, Sengoku BASARA, Samurai Warriors (TV Anime adaptation), Dragonar Academy, Break Blade, Armored Core, Metal Armor Dragonar, and never forget about Kamen Rider Gaim because it is Western, Dynasty and Samurai based motif.

As for the choice of franchise in this crossover: I happen to love Horizon in the Middle of Nowhere (I didn't watch TV or read the novel, LOL), and wanted to do a fanfic about some time. As for why Samurai 7 and Sengoku BASARA. I considered several franchises, such as Log Horizon (an actual Elder Tale), Nobunaga The Fool (same ways in Sengoku Period), Dai-Shogun: Great Revolution (didn't watch, seriously), Dragonar Academy (same), Armored Core (I played Nine Breaker, and watched every AC Playthrough), Metal Armor Dragonar (I played Another Century's Episode 3), Last Exiled: Fam, the Silver Wing (I watched freely on Animax, and suddenly, it closed forever), Samurai Warriors (I played only for Samurai Warriors 2: Xtreme Legend), Metal Gear (my brother played both (MGS1, MGS2 and MGS3), so I'll played Metal Gear), Call of Duty, Onimusha (I've played all) and Sengoku BASARA (I just played Devil KINGS, that's it). But GoW (not a video-game title, guys) is the only one where an idea solidified.

But, enough about that. With no further ado, I hope you enjoy the story.

Breaking through the World Saga

This story is re-imagining to Modern BASARA. 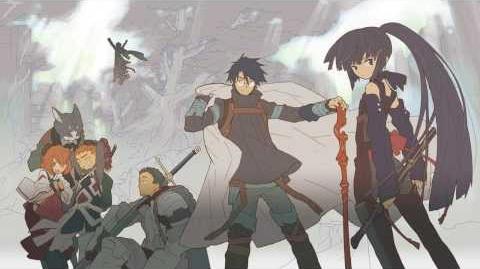 Man with a Mission ft. Takuma - Database (Log Horizon OP)
Add a photo to this gallery
Retrieved from "https://fanfiction.fandom.com/wiki/Onimusha:_The_End?oldid=169446"
Community content is available under CC-BY-SA unless otherwise noted.