What if Jafar made a third wish and made princess jasmine into a genie of a bottle? Wouldn't he then get another three wishes?

Princess Jasmine was transformed into a genie by rubbing a lamp that turned her into volouptous powerful genie with desire consequences "Serving under her master". hundreds of years later, she is later released by another woman named Princess Jasmine. In fact, two Jasmines wouldn't make sense unless Jafar banished the first one back in time where Agrabah was made.

Somehow, the two Jasmines began to become best and closest friends when they just met while trapped in the Cave of Wonders while it was still collapsed and just an ordinary sand dune above the huge cavern. Princess Jasmine wished for her three wishes, her first wish was to have one duplicate each and have the two duplicates to take their place to help Aladdin and his Genie to stop Jafar and save Agrabah. The second wish was perhaps make this alternate timeline to be just a timeloop that'll reset automatically daily, to relive in the past 24 hours, and the third wish was to have each other live together as immortal but normal people, "as immortal as gods, as in no aging, no starvation, or any injuries". Of course the third wish was granted along with the second wish of the timeloop, but Genie Jasmine did have all of her magic out, but it'll still be in the cave just above them invisibly. Genie Jasmine and Princess Jasmine were doing great together, as well as belly dancing together and even admiring each other's bellybuttons. Genie Jasmine loves it when Princess Jasmine plays with her bellybutton. 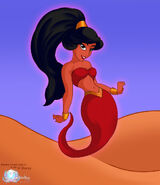