Fan Fiction
Register
Don't have an account?
Sign In
Advertisement
in: Characters, Characters favorited by TheIkranRider, Mascots,
and 46 more

Avenger of the Shirai Ryu

Evil, good when he was reformed

Avenger of the Shirai Ryu

Hanzo Hasashi, (波佐志 半蔵) better known as Scorpion (全蠍人 Zenkatsujin, "Full Scorpion Man"), is a resurrected ninja in the Mortal Kombat fighting game series as well as the mascot of the games. He is one of the very few original characters debuting in the first Mortal Kombat arcade game. He holds the distinction, along with Raiden and Sub-Zero (in one form or another), of appearing in every generation of Mortal Kombat games as a playable character.

Throughout the series, Scorpion has been a misguided antagonist after his resurrection, following those on the side of evil out of revenge and anger over the death of his family and clan. After being restored to his Human form and learning the truth about their demise, he has been a recurring supporting character for the series. Even to the point on raising Takeda while his father is out to kill Shang Tsung.

Scorpion has been seen in a few flashback scenes. Mostly when Liu Kang and Kung Lao dealt with his two fiery battles in the Netherrealm, or when Liu and Sub-Zero managed to defeat him. With the former winning over him since the cryomancer was filled with anger for having his clan destroyed.

The first time was when he worked for Shang Tsung, both during the first tournament and attempting to massacre the Shaolin Monks but failed as he was pulled into the magma by his undead legion. The second time was about three months later, when he escaped and attempted to bring the endless undead army back to life from all realms, but he was thwarted by Liu Kang once more then his body was sealed away by Raiden.

Scorpion escaped the Netherrealm along with Quan Chi, Shinnok, Reiko and the Army of Darkness! He assisted on the destruction of the Edenian Palace! 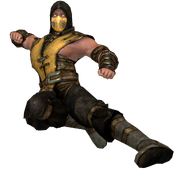 Scorpion in Defenders of the Realm

Enzo Matrix as a Scorpion lookalike

Scorpion with snake spear in 95 movie

The Most Tortured Character in Mortal Kombat History!
Community content is available under CC-BY-SA unless otherwise noted.
Advertisement