Shinnok, also known as The Fallen Elder God, is a character in the Mortal Kombat fighting game series. A vengeful, powerful Elder God of Death, he seeks death and destruction across all the realms. He serves as a primary antagonist of the franchise alongside Shao Kahn.

Shinnok returned as a playable character and the final boss of Mortal Kombat X, serving as the main antagonist of the game's Story Mode.

Unlike Shao Kahn, Shinnok relies less on brute strength and fearmongering, and more on charisma, dark powers, ancient artifacts, and manipulation. He is the ruler of the Netherrealm, possessing millions of years' worth of knowledge and power. He can impersonate any being of his choosing, as well as transform himself into an immense demon. He possesses extreme cunning and the ability to manipulate events through others. For example, he had Quan Chi convince Shao Kahn to merge Earthrealm with Outworld against the Elder Gods' will, so that both realms would be severely weakened and left vulnerable to invasion by the Netherealm.

Shinnok demands unwavering faith and loyalty from his followers and will not hesitate to kill anyone who so much as doubts, challenges, or even poses a potential threat to him. However, as Shinnok is a former Elder God, it is not possible to actually kill him; he can only be imprisoned within his own amulet or incapacitated.

Shinnok is the son of Kronika, a titan and the original Keeper of Time. His sister, Cetrion, is also an Elder God. In the story mode of Mortal Kombat 11, it is revealed that Kronika intended for both of her children to duel forever, thereby maintaining a balance of light and dark throughout the realms, with Shinnok representing darkness and death and Cetrion representing life and light.

This design suffocates all of the realms, as it requires them to constantly battle one another for domination. As such, not even Shinnok's banishment posed a threat to her design, nor did his eventual imprisonment within his own amulet or Cetrion's own betrayal of the Elder Gods.

However, Raiden irreversibly thwarted this balance by beheading Shinnok, thereby permanently incapacitating him. This enrages Kronika and sets in motion a chain of events where Kronika attempts to reset time and start a New Era where Shinnok and Cetrion can duel forever, and Raiden does not exist to thwart them.

Only Shang Tsung, Delia, Shao Kahn and Quan Chi can match Shinnok's skills as a sorcerer.

Shinnok was briefly seen as an unknown tall God wearing rainbow clothing and having blue skin during Aiko's heart meld with Kung Lao. He, along with Quan Chi, ruled Earthrealm with an iron fist raising several dead Kombatants and wreaking major havoc!

As the name entails, Shinnok has finally broken his shackles as he escaped the Netherrealm and waged war on the heavens. Aiko, Lao, Nightwolf and Fujin were receiving disturbing night terrors of the same ominous man the former two encountered during Aiko's heart meld in Kahn's invasion. Fujin dreaded it was indeed the fallen Elder God of death and destruction, the one Fujin and Raiden fought thousands of years ago and plunged Earthrealm and Zaterra to despair. At the sight of a dark cloud expanding and the weather changing sporadically, Fujin forewarned of the danger.

Shinnok then escaped from the Netherrealm and onto Edenia and started his conquest ruining the kingdom and to wage war on the Elder Gods in the heavens! He actually planned the ploy with the opal gift which burst into a portal as his Army of Darkness escaped and others began to destroy the Edenians, courtesy of his close followers Quan Chi and Tanya.

Shinnok soon disguised himself as Kai inside the Prison of the Edenian Palace. He persuaded Lao and Aiko to save him from Reiko; the former monk urged her for healing duties while he decimated the general! He thanked them both and was fully healed when Reiko fell. He watched the couple leave the cells, only to perform a taste of her powers. He made Aiko's heart speed up making her nervous and panicky. Then, he reached in further, causing her breathing and have sharp pangs! Those same attacks affected Lao's heart, and he was shocked it was Kai; however, upon his hazy observation, the sinister expressions were those belonging to Shinnok!! Thru his telekinesis, he drew their bodies close and read their hearts, emotions, desires and fears; he was intrigued by Aiko's rare abilities. He assured he won't have them killed, but to change their perception as he'd lure the Champion and the Gods to his domain in the Netherrealm!

He then took them to the Fire Well in order to lure in the Champion and the two Gods, Raiden and Fujin. The trio reached the twisted place, but they arrived too late for Lao and Aiko had their hearts corrupted. While Shinnok stunned the brothers, Liu was barely a match for the cardiokinetic and his best friend. Shinnok drew the hero close and was about to waste away his heart until Nightwolf performed a ritual that allowed his and the compatriots' strength to cross into the Netherrealm from the Edenia Palace. With Shinnok weakened by Liu's positive thoughts, he lost the Amulet temporarily, though Lao retrieved it, and the warlord attached it to the Staff! By the time Hanzo and Kuai restored the REAL Amulet at the Temple of Elements, Shinnok's powers ran out and realized he only was using the duplicate and Aiko's abilities since it was only in his possession! Raiden stunned the usurped couple before taking them to the Jinsei while Liu backed the hapless Elder God to the spiked Well! Fujin pushed the monk aside before he and Raiden forced Shinnok into the massive spikes below!! The two Gods became the new Champions and escorted the hurt hero back to Edenia!

Fujin assured Lao and Aiko that Shinnok shall not return for another millennia or so, with the real Amulet restored in Earthrealm thus the fallen warlord remained trapped in the Netherrealm. 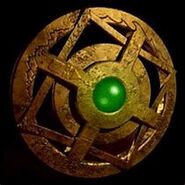 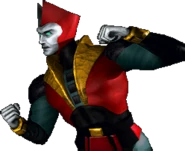 The Most Overrated Villain in Mortal Kombat History!
Community content is available under CC-BY-SA unless otherwise noted.
Advertisement