Simba & Kimba is a spinoff/reboot fan-fiction series to the Lion King franchise and the anime series Kimba the White Lion. The series was invented by SuperFrank225.

Simba (one of the two main protagonists of the series)

Kimba (one of the two main protagonists of the series) 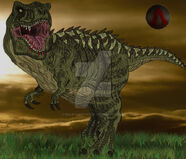 Rajapati (the series' true tertiary antagonist)
Add a photo to this gallery
Retrieved from "https://fanfiction.fandom.com/wiki/Simba_%26_Kimba_(Series)?oldid=163727"
Community content is available under CC-BY-SA unless otherwise noted.