Smoke appears with the younger Sub-Zero to search for the whereabouts of Bi-Han, the original Sub-Zero. They are in the Wastelands of Outworld, and the two Lin Kuei warriors decide to split up. Then Kitana appears before him. Smoke defeats Kitana in battle, later heads to the Living Forest, while Sub-Zero heads to the Soul Chamber. Smoke notices Kano and Shang Tsung, who are in the process of a heavy weapons deal. Smoke attempts to stop them and is first challenged by Kano. After defeating Kano, Shang Tsung morphs into the elder Sub-Zero, and teams up with Reptile in a two-on-one battle. Smoke defeats them both but is ambushed by Sektor and the Lin Kuei cyborgs. Smoke was saved from the Lin Kuei cyborgs by Raiden; however, this would eventually cause the younger Sub-Zero to go through the automation process instead.

Smoke joined Raiden's resistance to battle Shao Kahn's forces' invasion of Earthrealm, despite Raiden preventing him from helping Sub-Zero. When Raiden, Smoke, and Johnny Cage attempt to sway Princess Kitana to help the Earth warriors, she attacks Smoke and Johnny Cage first, and defeats them both in a two-on-one fight. At another point, Smoke appears with Raiden, Liu Kang, Kung Lao, and Johnny Cage and find Jade having just defeated Mileena. Smoke believes Mileena (a clone of Kitana) to be Kitana, and fights Jade for assaulting the Princess and their newest ally. However, Jade defeats Smoke, and is later informed of the situation. Although he is not seen during the second Mortal Kombat tournament, Raiden mentions to Liu Kang and Kung Lao that Smoke had been defeated and eliminated from the tournament prior to Johnny Cage's defeat at the hands of Ermac.

Smoke appears with the Earthrealm's warriors a few more times before the Lin Kuei cyborgs attack. Smoke is eventually killed by Sindel along with most of the Earthrealm fighters and is resurrected by Quan Chi to face Raiden. Ironically, Raiden escapes the Netherrealm to face Shao Kahn. 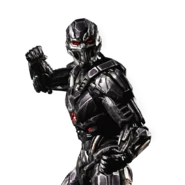