The Lindsay Analougue Show is a self-titled show about a young child-like chipmunk woman.

The show's intro song was an instrumental of Lindsay Lohan's "Rumors". The story usually centers around the overly-dramatic, delusional whiner Lindsay Analougue and her off-beat adventures. The author based the character on the exaggeration of the traits and more-or-so, flaws of her own. Manta-bee has stated that Lindsay's voice is based on her "childhood habit of making high-pitched sounds and giving her characters annoying, high pitched voices." as to purposely add emphasis to the annoyance of the character. As of recent seasons, the character has been given a lower, raspy slurring voice. The Lindsay Analougue Movie will be soon released, along with The Lindsay Analougue Game, closing the series.

Discussion of a second series with Lindsay as Queen has been had under the working title of "All Hail Queen Lindsay". But it might be changed due to its similarity to All Hail King Julian.

Shortly before the show's cancellation, an album of all the songs that have appeared in the show was released. 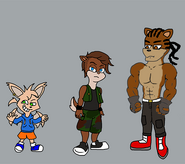 Left to Right: Brad, Phil and Tyrone.
Add a photo to this gallery

Lindsay's siblings before the redesign.

Victoria
Add a photo to this gallery

Retrieved from "https://fanfiction.fandom.com/wiki/The_Lindsay_Analougue_Show?oldid=280790"
Community content is available under CC-BY-SA unless otherwise noted.