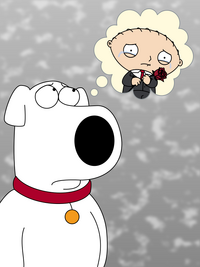 The Secret Life of Brian is a Family Guy fanfiction by LDEJRuff. It is a retelling of the Season 12 episodes "Life of Brian", "In Harmony's Way" and "Christmas Guy" through Brian and Vinny's points of view. It tells what would happen if Brian was never killed, but rather faked his own death.

Fresh from his time travel trip to Jamestown with Stewie, and setting things right, Brian is busy watching TV when he notices Stewie go to the hardware store. After Stewie teleports there with his new watch, Brian gets a call from his human son, Dylan, telling him that his mother, Tracy, has disappeared. Knowing that Dylan can't be alone without a parent or guardian to take him to school and work, Brian agrees to go to his home. Thinking of a way to be with Dylan, Brian recalls his trip to Vegas with Stewie and creates a clone of himself. Leaving home and his clone, he borrows Justin Bieber's Mercedes Benz for a few days. On the next day, while Stewie and the clone prepare to play a game of street hockey, Brian runs the Benz over the clone, and hides at a safe distance so he wouldn't be seen. Buying a new tag for his collar at the pet shop, Brian checks the status of his dying clone in the veterinary clinic, where the clone expresses Brian's love for his grieving family, thanking them for the life they gave him, before the clone dies.

The next day, Brian decides to get one last drink at The Drunken Clam, where he makes Jerome, the bartender, promise to keep Brian's still being alive a secret, and threatens Glenn Quagmire (whom always hated Brian since Season 8). Taking Jerome's advice, Brian secretly attends his own funeral after buying back his Prius, and says a sad goodbye to Stewie before he leaves Quahog for Providence, Dylan's home town.

Within a month's time after Brian arrives at the Flannigan house, he reunites with his younger brother, Vinny, at Roger Williams Park. Vinny reveals to Brian that his owner, Leo, has passed away during a yoga class. After being invited over to the Flannigan house for tea and dog biscuits, Vinny promises Brian not to tell the Griffins about his being alive, and agrees to be their new family dog. The next day, both brothers share their phone numbers, and their goodbyes, at the bus terminal before Vinny leaves for Quahog. Once there, he goes to the pet shop where he is later adopted by the Griffins.

That night, while Brian receives a text message from Vinny saying that he's a Griffin now, he gets a visit from a policeman, who tells him that Tracy has been found, but is comatose as a result from a car crash caused by Leo last month. Brian and Dylan agree to take momentary visits to the Rhode Island Hospital to check on her.

Meanwhile, back in Quahog, Ernie the Giant Chicken, who also knows about Brian's still being alive and is keeping that a secret as well, shares his condolences with Peter, and agrees never to fight him again.

After failing to get Vinny out of the Griffin house twice, Stewie reveals his hatred towards Vinny, who, still keeping his promise to Brian, offers comfort, explaining how he lost Leo, and feeling a kinship. Finally understanding Vinny, Stewie accepts his friendship. That night, Vinny texts Brian about his winning Stewie over while the latter is visiting the hospital, checking on Tracy once again.

Some time later, Glenn offers to stay at the Griffin house for a few days. Vinny secretly calls Brian while Dylan is at school, about Glenn's stay. Fearful, Brian informs his brother about his rivalry towards Glenn, explaining about the long rant Glenn gave him at the Steakhouse one night, their fiasco with Cheryl Tiegs and Jillian Russel-Wilcox, and the time he found out about Ida, and the threat Glenn gave him right after. Shocked about their rivalry, Vinny later tells Brian to give Dylan his regards before the two hang up. A few days later, after breakfast, Vinny reveals information about his relationship with Brian to Glenn, who has recently formed a folk-singing duo with Peter. He persuades Glenn to forgive Brian for his actions, just like he has, and change, before he returns home, leaving Glenn to get ready for the New England Music Festival later that day.

After the music festival, Vinny informs Brian (who secretly attended in the guise of a baby) about how Peter and Glenn fired Mort Goldman as their manager, and about their tour. It's when Jasper, their cousin, calls, and Vinny unknowingly spills the beans about Brian's still being alive to him. Jasper agrees to keep their secret, and later tells his spouse, Ricardo, about it.

During Thanksgiving, Glenn, on a plane ride back home after a falling out on Conan, is reminded from a passenger in front of him about Vinny's words of how he needs to change. Remorseful then, Glenn decides to go to the Flannigan house, where Jasper and Ricardo are visiting, and forgives Brian for his actions while informing him about Vinny's chat and realizing that he was a jerk toward Peter during the last two months. Brian, moved by Glenn's words, forgives him back. Jasper offers Glenn to come inside for dinner, but Glenn kindly denies it, saying that he has something to take care of back home.

After Glenn returns home in front of the Griffins and reconciles with Peter, he says that he's taken Vinny's advice to him.

Within the following month, Brian receives a call from the Rhode Island Hospital, who informs him about Tracy's awakening in the next few days. Overjoyed, Brian decides to go to Providence Place to buy a Christmas present. That's when Vinny comes in and informs Brian about the Christmas Carnival's cancellation at the Quahog Mall. On a quest for answers, the two brothers run an errand for Bernie "The Walrus" Spumoni to retrieve the severed foot of Johnny "The Foot" Giatelli. After retrieving the foot and buying a toy train kit, the two unknowingly switch boxes and give the train to The Walrus while Vinny takes the foot back with him after learning about Carter Pewterschmidt (Lois' dad) cancelling the Carnival.

After Peter convinced Carter to bring the Carnival back, Vinny notices Stewie's sad expression while the family is in line for him to see Santa. As the Carnival fails to raise Stewie's spirits (after he goes on a rampage during the time of its earlier cancellation), he answers the Mall Santa's question about what he wants for Christmas: he wants Brian back, despite the Mall Santa's skepticism. That's when Vinny secretly calls Brian again, this time, about the former's later attempt to emulate the latter so he could cheer Stewie up. Brian, reluctantly agreeing to this, informs Vinny that Tracy's going to recover soon. Later that night, Tracy does recover, and reunites with her son.

The next day, Dylan decides its time for Brian to return home. Even though Brian tries to refuse, Tracy agrees with Dylan's decision. Playing it off for the Griffins as a sort of miracle, Brian also agrees. After saying goodbye to Tracy and Dylan, Brian returns home, where Peter, Lois, Meg and Chris are overjoyed to see him alive once he enters the house.

Later that day, after he says his goodbye to Stewie before he goes back in time to save the Brian he didn't know was a clone, Vinny receives a call from Brian, telling him about his return home. A fearful Vinny admits his earlier plan to retrieve the time machine return pad from the past Stewie. Realizing what Vinny did, Brian informs him that if Stewie succeeds, the timeline would cease to exist, and them with it. Just then, they, too, are transported back to the day Brian faked his death. Resigned to repeat this earlier action, he witnesses Stewie save his clone just as he's about to run him over. Vinny explains this to Brian before New Brian, who reveals that he transported them back to that day, appears behind them. He offers the two a second chance, after being sent by Death.

After Stewie fades from existence due to saving Brian's clone, New Brian stops time and walks to the clone with Brian and Vinny, and tells them about the second chance. The clone has to prevent Leo's accident from occurring so Vinny won't have to lose him again, and Brian will have to spend all those several months again with the Griffins. Accepting this, Brian's clone gives the hockey helmet to Brian, before the latter and Vinny say goodbye to each other, and wish each other a Merry Christmas. That said, New Brian resumes time and disappears with Brian's clone and Vinny, leaving Brian behind to reunite with Stewie.

Several months pass, and both dogs spend their second chances to be with their owners. Finally, on Christmas Day, Brian shares a photo he took with Stewie, and receives a letter from Vinny, who thanks Brian for giving him a home, and promising that the two would meet again someday, again wishing him a Merry Christmas.

The fanfic ends with Brian opening his gift from Dylan, a video of him and Tracy, wishing him a Merry Christmas.

Retrieved from "https://fanfiction.fandom.com/wiki/The_Secret_Life_of_Brian?oldid=193452"
Community content is available under CC-BY-SA unless otherwise noted.