The Secret Origin of Godzilla

The Secret Origin of Godzilla (ゴジラの起源 Origin of Gojira) is an upcoming novel-length fan fiction written by Woodrow Ness and based on the monster originally created by Toho Co., Ltd. The story will be a brand new origin story for the historic kaiju and will take place during the year 2012. It was scheduled to be released sometime in 2013; however, as of December 27, 2014, it still had not been released and no further updates have been made available. As of March 10, 2017 no further updates were available and the story is assumed to be cancelled.

In 2012, an experiment goes horribly wrong leaving behind a 100 metre tall monster known simply as 'Godzilla'.

A 23 year old female seismologist who works at the Japan Meteorological Agency.

A 24 year old male seismologist who works with Yuki at the JMA.

The prime minister of Japan.

Chief of ground staff for the Japan Ground Self-Defense Force. 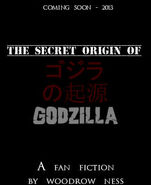