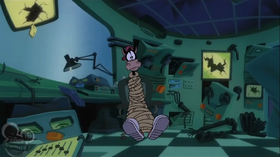 A best-of-five game of dodgeball

Geoff
"The Stolen Cartoons" is the tenth episode of Total Drama's House of Mouse. It originally aired on Disney Channel on October 7, 2009.

Malva of the Elite 4 reports directly from the competition, chronicling the events that have taken place in the House Cup so far. Moments of today's dodgeball challenge are then shown. Courtney helps her team to win and Slytherin wins, and it is time for the Gryffindors to vote someone off for the first time. Malva ends her report, and the scene shifts to an House of Mouse nightclub, where the Gilded Chris Ceremony was held.

At the Awards Ceremony, the Gryffindors are getting ready to vote someone off. Meanwhile, Leshawna is shown trapped in the bank vault, claiming that the whole situation is cruel. At the ceremony, Mickey greets the guests as they arrive. Donald expresses envy about not being the host of the club and vents about it to Daisy, who serves as receptionist, who tells him he'll surely get a chance to be the host someday. Just then, Pete barges in and orders the crew to leave, saying he has just bought the building and is now shutting the place down. However, Mickey finds a clause in the contract that says Pete cannot shut the club down as long as they have a show going on. Pete storms out, saying he'll make sure the show doesn't go on.

The first two cartoons of the day are shown, but when the next cartoon does not come up, Mickey and Minnie go up to Horace's booth to investigate and find him tied up, saying that someone has stolen their cartoons. Mickey figures that Pete is the culprit, but the fat cat denies his guilt, despite the obvious clues pointing to him. Mickey, Minnie, and Goofy leave to go film a new cartoon, leaving Donald in charge of the club till they get back. Donald naturally takes advantage of this and reshapes the club in his image, changing its name to the House of Duck. However, he soon has trouble keeping things running smoothly when he has to bring the guests their food. Then, when the guests grow restless for Mickey to come back, he attempts imitating Mickey's roles from Steamboat Willie and Fantasia, and then brings out a cardboard cutout of Mickey, which just ends up making them leave after they run out of patience waiting for Mickey to come back.

Just when Pete is about to make Donald hand over the keys, Mickey, Minnie, and Goofy return with the cartoon they just filmed, and upon seeing that Mickey's back, the guests return as well, ruining Pete's plans. Mickey runs the new cartoon, but after it's finished, Pete points out that with only that one cartoon, the guests will eventually get bored and stop coming. However, in doing so, the missing cartoon reels he stole earlier fall out of his suit. One comedic chase later, Tantor grabs Pete and throws him out onto the street near the crossing light, being noticed by Lydia Pearson and her daughter Pepper Ann. Later, the Gryffindors are ready at the Gilded Chris Ceremony. At the ceremony, Duncan, Bridgette, Cody, Trent, Heather, Leshawna and Harold all receive awards, while Geoff and Gwen looked at each other.

With Geoff and Gwen left, Gwen believes her time is up and concedes defeat, but Mickey tells her to sit down and then gives her the last award. Gwen and Bridgette were shocked that Geoff is voted off, as he is the nicest guy there, but Duncan and Heather reveal that's exactly why he has to go. Being popular with the others, if Geoff made it to the finale, their lack of popularity would help Geoff win, so he has to go. Geoff accepts his fate and heads for the Walk of Shame. Before Geoff leaves, he confesses to Bridgette that she didn't vote him off, even though this angers Duncan. They almost kiss except he recoils at the last second because of her skunk stench. He then simply waves her goodbye from afar, though she is clearly hurt by this.

On the way, Gwen stops him and gives him back his camera, which she fished out during the challenge. She tells Geoff that it will have a little bit of House of Mouse in it, which Geoff says makes it a better souvenir. Gwen is about to say goodbye when Geoff grabs her and takes a picture of them, complete with a House of Mouse entrance gate and Bridgette in the image.

Gwen and Geoff realize that they are in the bottom two.

Gwen is upset about Geoff's elimination.

Geoff walks down the Walk of Shame, with a smile on his face.

Gwen gives Geoff back his camera that she used during the dodgeball challenge.

The photo taken by Geoff of him and Gwen at the very end of the episode.