The Three Caballeros (House of Mouse)

The Three Caballeros (House of Mouse) 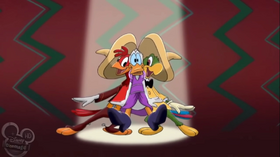 "We Are The Three Caballeros"

Tyler
"The Three Caballeros" is the eleventh episode of Total Drama's House of Mouse. It originally aired on Disney Channel on October 8, 2009.

The Three Caballeros and Sierra are to perform at the club, but nobody knows that Donald was one of the Caballeros, so he tries to be the most important performer of the group by renaming himself "The Duck Formerly Known as Donald" (a parody of Prince).

When Panchito and José finally arrive, they play their favorite brand of tricks on Donald and he soon comes around.

Goofy takes the order to give Pooh some honey "on the house" literally.

"But Timon, I always thought it was Donald Duck."

Donald crying after seeing that only a few people know he's the third Caballero.

"Ah, but this is The Duck Formerly Known as Donald merchandise."

Cody thanks Sierra for winning the challenge for Gryffindor.

Courtney and Tyler slowly glance at each other wondering who will get the final Gilded Chris Award.

Tyler is eliminated, and he shows Lindsay off to his Slytherin team back home.