Throttle is one of the main characters from the Biker Mice from Mars, both in the shows airing in 1994 and 2006 and in the games based on them and is voiced by Rob Paulsen. He is the leader-figure of the trio and has orangish-tan fur. Throttle's vision was damaged in the same incident that caused the losses of Modo's arm and the right side of Vinnie's face. As a result, he wears green sunglasses with field spec capabilities.

Throttle was hanging out with the other Mice and Charley when Ikran's younger self-narrator entered in Last Chance. She was down in the dumps as she was struggling to handle her critical thinking and comprehension questions in her grammar reading class. He and Charley wanted to teach her on how to use her mind in order to solve problems, even when on the fly, before Vinnie cheered her up as he was jamming to the Beach Boys oldie!

The Myth of Mars[]

He was mentioned subtly as a member of the Freedom Fighters protecting Mars and Chicago. With evidence of some leftover relics from the Biker Mice, Catatonians, and Plutarkians, they were evidence that life existed on the Red Planet! Thus, humanity evolved and migrated there! And the Mice had become extinct with the other races. 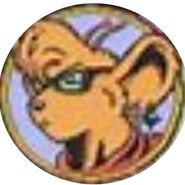 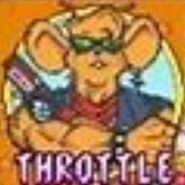