Timon and Pumbaa (House of Mouse)

Timon and Pumbaa (House of Mouse) 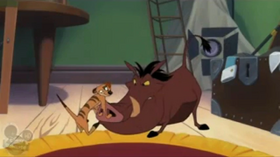 "Timon and Pumbaa" is the fifteenth episode of Total Drama's House of Mouse. It originally aired on Disney Channel on October 12, 2009.

Timon and Pumbaa are set to perform a show, but end their friendship after they decide that they can't make the same decisions, so Mickey decides to bring them back together. Meanwhile, the Slytherin team discover oil, and realize they can heat it to heat things up all over the globe - leading to a first battle with the Gryffindor newcomer girls, where the Gryffindors must stop the Slytherin from igniting the oil deposits beneath Los Angeles' La Brea Tar Pits.