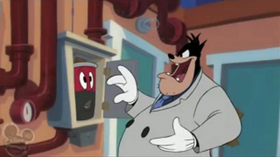 Find the batterys from Pete, and deliver it back to the House of Mouse

Cody
"Unplugged Club" is the twelve episode of Total Drama's House of Mouse. It originally aired on Disney Channel on October 9, 2009.

Pete attempts to stop the show again by removing the electrical battery and turning off all the club's electricity. So Mickey and Minnie send the birthday girl, Gwen Dracula and Cody from Gryffindor, and Lindsay and Beth from Slytherin to find the newly fresh batteries to the nightclub. Then Mickey and Minnie turn the power back on again with Supreme Divine Overlord Zeus' lightning bolt, but then Pete tricks Zeus into leaving with the thunderbolt. But Minnie realizes they must "charge" to the battery, restoring it and the club's electricity, while Pete is shocked by Zeus as a punishment for tricking him. 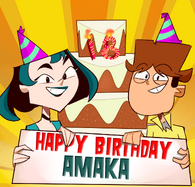 This episode features a special romantic date for Gwen and Cody, because it's Gwen's 19th birthday.

Cody in the confessional after getting electrocuted.

Cody moments before being eliminated.