We Got The Band is the first episode of Crackers or Wackers.

Bessie tells Beth they could be friends and, later, come up with the idea to form a band called The Girls With Glasses. Lindsay, who was so thrilled about the prospect of joining the band, tries to become blind in order to get glasses so she could be in the band. At the end, Lindsay somehow succeeds, but Beth tells Lindsay that she is perfect just the way she was.

Lindsay asks Gwen to help her get blind. 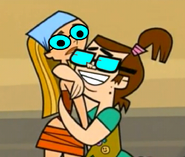 Beth hugs Lindsay when she says she is perfect the way she was.
Add a photo to this gallery
Retrieved from "https://fanfiction.fandom.com/wiki/We_Got_The_Band?oldid=157321"
Community content is available under CC-BY-SA unless otherwise noted.